Graduate Finds Cultural Identity: A New Future from a Lost Past for Blind Adoptee 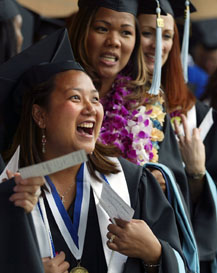 Thirty years ago, a partially blind baby girl arrived in the United States at the height of the Vietnam War.

She was on one of the last planes transporting young children out of Saigon.

She had nothing. Not even an identity.

Her adoptive American family named her Kimberly and raised her in Whittier, Calif.

As the girl became a woman, she began wondering, "Who am I?"

On a recent Saturday, Kimberly Thompson found that the answer was not in the past, but in her present and future. She graduated with a master’s degree in counseling from Cal State Fullerton – one of a record 8,525 students who got diplomas late last month.

"All my life, I felt like I had a lot of challenges," said Thompson, now 31, of Yorba Linda, Calif. "There were many times when I didn’t have anyone to talk to. So I was naturally drawn to the concept of counseling. I wanted to become an advocate for those who felt like I did."

As a family counselor, Thompson sees herself as someone who can help others find answers about themselves, even though her own quest is far from over.

Thompson knows nothing about her biological parents. She does not know her birth date.

She was raised without any exposure to Vietnamese-American culture.

Her questions about her cultural identity began when she entered the undergraduate program at Cal State Fullerton, where she observed a wide range of Asian-Americans on campus.

Her identity crisis wasn’t confined to cultural heritage. She also was in denial about the challenges of her blindness.

"I didn’t want to identify myself as legally blind," she said. Only when faced with possible academic failure did she seek assistance in reading and studying from Disabled Students Services.

Thompson overcame those difficulties and received her bachelor’s degree in psychology, earning a 3.8 GPA.

Then she aimed for a master’s degree in counseling.

Her desire to understand herself intensified, so that when she contemplated subjects for her master’s project, she found her answer from the woman in the mirror.

When she did research on Operation Babylift, the historical event that brought her to the United States, she picked up bits of her past. She learned that rescuers transported babies like her in cardboard boxes amid the haste of leaving Saigon. She talked with other adoptees who were looking for a lost part of themselves.

"They validated my own feelings," Thompson said. Feelings of not belonging anywhere. Feelings that something important was missing.

Then she realized something valuable: She was not alone. Never was.

Shortly afterward, she knew she was ready to move on. Thompson may remain physically blind, but in other ways, she has clear sight, especially of who she wants to be.

Her first step is to touch the fabric of a culture inescapably linked to her past: that of Vietnamese-Americans.