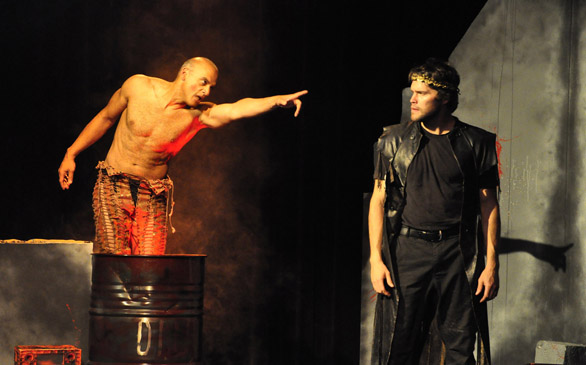 Shakespeare’s masterpieces have been produced, reproduced and even molested a little the world over. This summer, “The Wicked Wilde Shakespeare Festival” presented by the award-winning Los Angeles Women’s Shakespeare Company offers its own experimental productions in several hourlong, well delivered William Shakespeare plays. I went on a Saturday night and caught both their productions of “A Tyrant’s Tale” (their take on “The Winter’s Tale”) and a superb customized version of “Macbeth” that takes place in a post-apocalyptic oil field.

“A Tyrant’s Tale” is more like a crash course in Shakespeare. They speak like Shakespeare, dress like Shakespeare and they even keep the man’s story in tact. But when all is said and done this production leaves out the infamous stage direction “Exit, pursued by a bear,” which if coupled with Laura Covelli (as Perdita) and David Glasser’s (as Florizel) little dance number would have energized the play a bit.

Perhaps the evening’s biggest challenge is in having a man play Lady Macbeth. A challenge that Kevin Vavasseur meets, explores, then promptly conquers. Vavasseur in drag works. While he is a very muscular man he doesn’t play on it while in Lady Macbeth’s costume, which is a typical tattoo green colored sleeveless gown, very post-apocalyptic feminine. The potential for a cheap laugh is totally there, yet I applaud him and director Lisa Wolpe for moving right past the social blip and into the story, which naturally clutches your attention and tosses it back to Shakespeare’s flamboyantly poetic language.

This post-apocalyptic version of “Macbeth” is nothing short of fantastic. Vavasseur fills every one of his roles to its potential as does Andrew Heffernan as Macbeth and Scott McRae as a witch, Banquo, Duncan, Porter and Macduff. I was especially inspired and surprised at how quickly and very well everyone was able to change not only from one character to the next, but also from costume to costume.