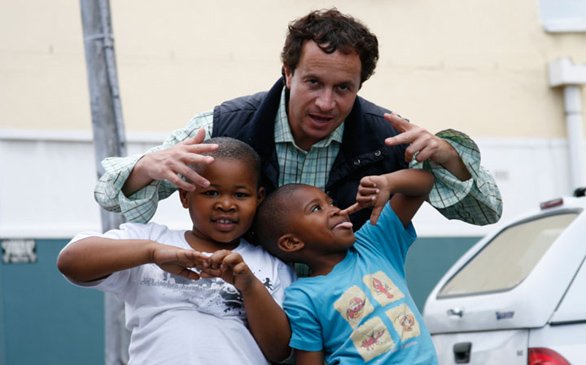 It’s not often that Angelina Jolie, Madonna and Pauly Shore land in the same sentence, but in the new mockumentary Adopted, Shore (who wrote, directed and stars in the movie) follows in the footsteps of the megastars by traveling to Africa in search of a baby all his own. (*If that sounds like a familiar setup, it’s because Sacha Baron Cohen beat Shore to the punch in Brüno. However, Adopted had been in production long before Brüno stole their joke thunder.)

Best known for coining the phrase, “What’s up, buuuuddy? It’s the weee-sel,” and hosting Spring Break parties for MTV the first time acid wash was in style, the search for some baby love may seem like a pretty major departure, but Shore says the idea first struck him when he was playing with his brother’s two kids. Comedians tend to be pretty dark, troubled people who deal with their pain by making other people laugh, and Shore admits that, while he makes light of it, he really does want a family.

“I’m very torn,” he says, uncharacteristically mellow. “Emotionally, spiritually, I’m like every other guy in his 40s that wants to settle down. But my life is so not that. I’m like George Clooney where I’m up in the air all the time, doing shows and that’s not the type of guy that a girl is attracted to long term. Part of me thinks I’m just gonna get a girl pregnant accidentally. She’s gonna be like, ‘I’m pregnant,’ and I’ll be like, ‘OK, cool! As long as you’re not a crackhead.’ Hey, I was an accident. You never know how things’ll work out.”

Given a brief glimpse into Shore’s version of a warm, fuzzy side, I ask if he thinks comedy is the best delivery system for the kind of shocking statistics and important issues brought up in the film. Sometimes, when dealing with something truly incomprehensible, you have to make people laugh to pay attention. It would be too overwhelming otherwise, and no one needs another Sally Struthers.

“I like to talk about things that are taboo or you’re not supposed to make fun of,” Shore offers. “I do that with a lot of my stand-up. The one thing I learned growing up at the Comedy Store is you can take any subject, pretty much, and bring some comedy to it.”

Prodded further, he rattles off a list of the things that aren’t on the menu for humor.

So how does Shore decide what is funny? Stand-up comedy is a very insular group where comics tend to surround themselves with other funny people to bounce stuff off of.

“Yeah, it’s kind of like the mafia; everyone’s on the inside,” Shore laughs.

Working on the film he needed those kinds of sounding boards more than ever because he didn’t have an audience to get reactions from to know when a bit was working.

Though he says he brought in a few fellow comedians while editing the movie and writing the voiceover, he says that he mainly relied on himself and early audiences to figure out what worked best and was funniest.

“The test audience,” he says, “they’re the ones who really tell you how to lock the picture, but you really have to be something of an expert in getting it to a place where you’re comfortable and feel good enough to show it to an audience. They do that with all the comedies. They test it and test it and test it. I tested my movie probably 10 times before I locked it.”

Now that he’s made a film that fuses their names together, I had to ask, besides an affinity for African babies, what do Angelina Jolie, Madonna and Pauly Shore all have in common?

“We all reinvent ourselves,” Shore says.

Profits from the DVD sale will be directed to Nonceba Family Counseling Center (nonceba.org), a nonprofit that provides physically and sexually abused children with counseling.

Adopted will be available June 15.