The A-Team: It’s the best action movie since Speed. 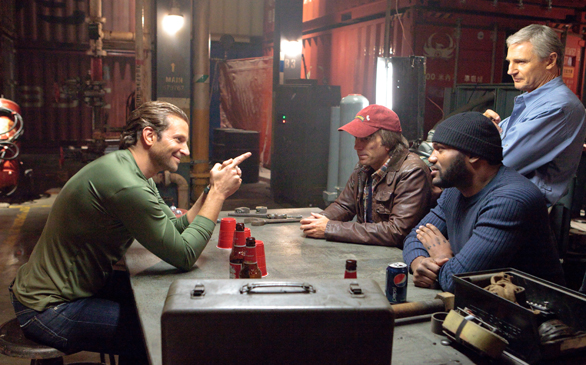 It’s been a slow race to glory for this year’s summer box office. Early reports surmise that even with the much-awaited releases of Sex and the City 2, Disney’s Prince of Persia and the final installment of the family-friendly Shrek franchise, the studios aren’t pulling in the massive box office receipts they were hoping for. Someone somewhere needs to be the catalyst to pull the popcorn movie out of the doldrums.

The A-Team just might be that entity. Based on the highly popular 1980s series of the same name, The A-Team follows the wild ride adventures of four U.S. Army Special Forces soldiers (who have become mercenaries). Each is very distinctive in his own rite: Face (Bradley Cooper) is the thrill-seeking playboy who manages to find action and a stunning D-Cup wherever he goes. B.A. Baracus (played by MMA superstar Quinton “Rampage” Jackson) is the Mohawk-clad buff warrior who pities the fool that gets in his way. Hannibal (Liam Neeson) is their fearless leader and Capt. Murdock (District 9’s Sharlto Copley) is the crazy-eyed freak show who always manages to get the team out of danger – within an inch of everyone’s personal comfort and sanity.

As the story opens, the A-Team has been commissioned by General Morrison (Gerald McRaney) and a CIA special operative, Agent Lynch (Patrick Wilson), to retrieve a suitcase full of stolen currency plates snatched by enemy forces in the Middle East. They face opposition from a team of rogue mercenaries led by a violent soldier of fortune named Pike. Still, the team manages to complete the mission. That is, until something goes horribly wrong. Soon, the men find themselves under arrest with a number of branches of government on their tails.

Dragged into the scandal is Capt. Charisa Sosa (Jessica Biel). She sent indirect orders to the A-Team to get back the plates and now, because of her affiliation with them, has been stripped of her military stripes. The A-Team must figure out how to restore their good names and solve the mystery of who is behind the theft.

For most of the cast, the chance to work on The A-Team was a dream come true. Cooper, Copley and Jackson admitted to being huge fans of the series growing up. For Neeson, he was driven by another impetus to do the film.

“It was very popular,” explains the actor, who was living in his native Ireland when the series first hit airwaves. “It wasn’t my cup of tea to be honest.”

Instead, Neeson cites his growing love of the action genre as the catalyst for his participation in the remake.

The A-Team’s action sequences do not disappoint. Writer and director Joe Carnahan teamed with writer-actor Brian Bloom (who also portrays the villainous Pike) to create the testosterone-fueled big screen juggernaut. Gone are the campy stunts that made the series so popular. These sequences have been replaced with (quite possibly) the most audacious and unusual eruptions of badassness to ever hit the multiplex.

In order to fulfill the physical requirements of the film, the cast endured rigorous preparation. Cooper worked with celebrity trainer Ashley Conrad, who actually flew to Vancouver to whip him into shape. He welcomed the opportunity to build up his muscles ... and his resume.

“There weren’t a plethora of action movies that were coming to me,” he says.

Cooper turned in his romantic comedy badge for a chance to play with the big boys for a change. Although he loved the experience, he admits that his body paid the ultimate price.

“Epsom salts were my savior on this movie,” he confesses.

Even 58-year-old Neeson is sporting the biceps of a man half his age in the film, adding to the overall power that each character possesses. But The A-Team isn’t just a mindless stringing together of car chases, fistfights and plane crashes; it has humor and sex appeal as well. The chemistry of the cast plays out scene after scene.

Finally, the summer movie season has its first real winner: kick-ass enough for the guys, sexy and thrilling for the girls and outstanding for everyone in between.

The A-Team releases in theaters June 11.