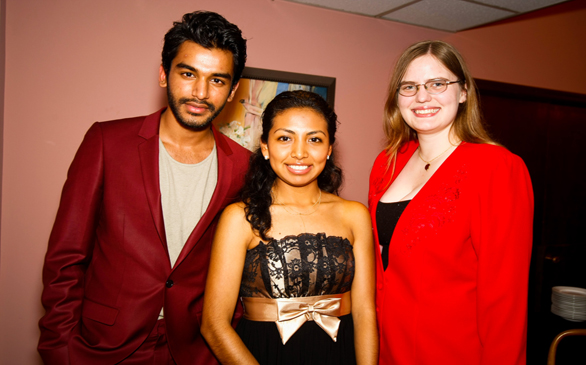 Chances are, you’ve been forced to compete in your school’s science fair at least once in your life. If your school was anything like mine, you at least got a medal for participation and were just relieved it was over. But there are some students who spend their entire high school careers preparing to compete in the Intel International Science and Engineering Fair. And what you may not know is that these 17-year-old geniuses aren’t as different – or as nerdy – as you might think.

How did you get hooked up with the participants you followed?

Tom Shepard: We actually followed six kids for two years, and in the edit room were forced to cut the film down to three, mostly because of screen time. The film couldn’t hold six stories. We were drawn to Kelydra, Harmain and Ana largely because none of them had many resources and were driven largely by their own passion and commitment.

Each of them had enormous obstacles that they were trying to overcome. In the case of Harmain, who was born in Pakistan, he grew up poor. His mother held the family together largely through food stamps and recycled aluminum cans. His need to achieve was fierce and directly proportional to his impoverished upbringing. Ana, too, grew up in modest circumstances and attended an all minority high school in New York City (Uniondale). We don’t often see Latinos or African Americans in the winners’ circles of elite science competition. Ana was challenging basic assumptions about who can be a research scientist in America. Finally, Kelydra discovered a way to measure and remove a toxic chemical that local industry in West Virginia had been dumping in the Ohio River. Her work put her in a sometimes uncomfortable spotlight politically, but she was determined to get the national attention she felt she deserved for trying to protect her community.

Our filmmaking team was impressed again and again by the fortitude of these ‘whiz kids’ as they used their science to define themselves into young adulthood.

Was it difficult working with such smart teens?

There are far too few stories in the media of young people coming of age, who aren’t either athletes or future “American Idol”s. I was a science kid when I was younger. I had a very inspiring science teacher, who also just happened to be cool. Many of the kids in her classes would bring their brown bags and meet in the science lab for lunch. For a couple of years, my social life revolved around doing science research and competing in science fairs.

I had never seen a film about kids like me. Science gave me a voice when I was a teenager; it allowed me to explore questions about the world, and in turn, to explore my own personal questions and hopes.

What was it like for you seeing the various rejections, acceptances, failures and triumphs?

It was a bit of an emotional roller coaster. When you get invested in teenaged lives (or telling the stories of teenagers), you appreciate how mercurial everything is. One week, our subjects would be feeling very self-conscious, fearful and unready to face the world. Three weeks later, their enthusiasm would be brimming over as they achieve something and feel complete triumph over the world.

Besides winning and losing, competitions provide an occasion for young scientists to bring forward their work in the public arena. It’s a dialogue that happens and can empower the young people who have done significant research and thinking about a problem. It also tests young people, pushing them out of their comfort zones and engaging them in real critical thinking about the work they’ve done.

Why did you want to make a film about aspiring scientists?

I was a science kid and was a finalist in this competition back in 1987. My history with the competition was a huge draw to make this film.

When I got to college, though, I took a big left turn to become a filmmaker. Still, I feel like I am a scientist in many ways. There are a number of parallels between documentary filmmaking and science research. In fact, making a documentary requires that I ask hard questions and test those questions out in the edit room by sifting through hundreds of hours of footage (or data!). In other words, distilling the storylines of our film through the filtering of many hours of video footage, feels like distilling the data of a big science fair project. Often times, too, the final cut of a film doesn’t necessarily resemble the hypotheses we articulated at the film’s outset.

In general, I think we need to encourage young (and older) people to be more scientifically and technically literate, even if they don’t get degrees in science or research. To be an informed citizen in our country, we need to understand science better than we do in order to make informed decisions.