Not A Doctor: But I Play One on Wii 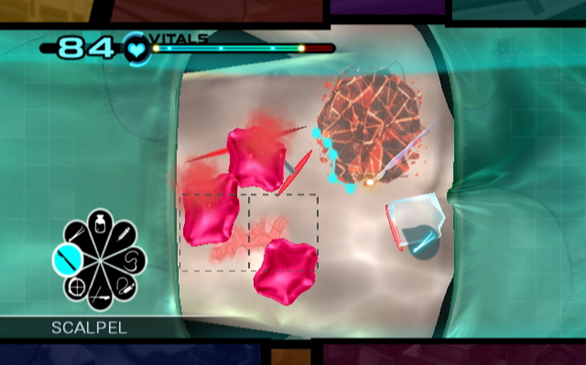 Doctors are true heroes – lifesavers who devote themselves to healing the sick at any cost – but movies and television have taught us that real medicine just doesn’t pack the entertainment punch as its celluloid alternative. We rely on doctors’ diagnostics, but it is just more fun to watch Dr. House piece together clues to determine and cure each week’s obscure illness. The emergency room may be our best hope for overcoming deadly diseases, but somehow a routine procedure is not quite as alluring as when everything falls apart in a desperate, impromptu surgery on “ER.”

“Trauma Team” for the Wii has definitely opted for the glamour of cinematic surgery over realism, and it works out well. In the spirit of “Trauma Center,” this new title introduces us to an anime world filled with colorful characters – both doctors and patients alike – and completely unlikely plot twists. Sure, the surgery may be unrealistic and filled with brightly colored graphics that in no way resemble their real-world counterparts, but considering that the game also includes ninja, ghosts and superheroes, realism was obviously never a selling point of this game.

Unlike previous “Trauma” titles, “Trauma Team” puts you in the scrubs of six different doctors. The classic surgery gameplay uses the Wii Remote as a scalpel, syringe and suture and is represented by an amnesiac convict surgeon. The traditional surgery gameplay is then put on high speed as master paramedic Maria Torres fights to save multiple victims at once. You can also use saws and forceps to reset and rebuild bones as the soft-hearted giant orthopedic surgeon, Dr. Freebird.

While these modes are challenging, the real demon in this game is the endoscopic surgeon, Tomoe Tachibana. All of the action in this mode is based around feeding the endoscope through narrow walls by pushing the Wii Remote forward and steering with the Nunchuk’s control stick. This makes for an unusually physical process that will keep even the most patient player on edge while balancing the subtle steering with the constant feeding motion. This is nerve-wracking enough on its own, but you will also have to perform various medical procedures as the body continuously hemorrhages and the vitals drop. The bottom line is that you are not going to have a calm, relaxing gaming session when you are taking on Tomoe’s missions.

Fortunately, the game does offer a pair of more cranial options. Gabriel Cunningham – the curmudgeonly chain-smoking diagnostician who seems to have borrowed more than a few mannerisms from Dr. House – examines his patients in a series of mini-games aimed at determining enough symptoms to identify the disease. Some of these tests resemble actual medical procedures like listening through a stethoscope for abnormalities, while others like comparing CAT scans more resemble typical casual games. Fortunately, there is enough variety that the game stays interesting enough to get to a diagnosis. Plus, of course, there’s a spunky diagnostic computer helping you along the way.

If Gabe is Dr. House, then Naomi the forensic investigator is a slightly psychic version of the “CSI” team. While her investigation includes listening to testimony, using forensic tools to search the scene for clues and piecing evidence together to solve the mystery in much the same way that the “CSI” team does, the gameplay is just far more enjoyable than any “CSI” game title. Again, the lively anime graphics and touching (if improbable and often ridiculous) storyline help the experience quite a bit, but perhaps the greatest tool the mode has is its complete lack of realism. Even the goriest of murders comes off in a cartoony fashion and the twists too insane to nitpick, letting players enjoy the challenge without any realism to interrupt the experience.

While the game lets you play each of the doctors’ storylines independently, it is truly worth switching between doctors to play chronologically. You may have to relearn each of the gameplay styles, but the interweaving storylines and deliciously thick layers of Japanese drama do a good job of making you feel for the characters not just as heroes, but as people. Granted, they may be ridiculous, cartoony people with lives that put soap operas to shame, but that just adds to the escapism.

And, really, when you have a game that is based on the increasingly difficult struggle against death, the charmingly bizarre escapism helps keep everything from getting too dark.

Games & Gadgets
Gaming against sexual assault, with 'Decisions That Matter' and other video games
1,272 views