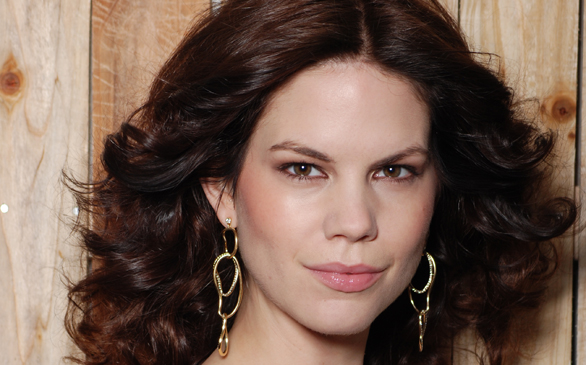 Before Mariana Klaveno became one of my favorite blood-sucking bitches on television, she was just a girl with a dream growing up on a farm. Best known for her role as Lorena, Bill’s maker on “True Blood” (If you don’t know what I’m talking about, you and your DVD player need a serious date.), Klaveno exudes an elegant charisma that makes her potentially loathsome character both dastardly and compelling as she mercilessly feeds her way through the decades. It’s a far cry from the rural farming community in eastern Washington State where Klaveno grew up with three siblings and a father who grew wheat and barley.

“I always knew I wanted to act when I was a child,” she says, “but I had to wait until I got to college because it was such a small area.”

When she got to college at the University of Washington in Seattle, she immediately enrolled in drama classes and fell in love even more than she thought she would.

After graduating, she “bit the bullet” and moved to Los Angeles. But things weren’t easy. She got a job as a hostess at Morton’s Steakhouse in Burbank and worked there for seven years, slowly accruing her SAG card, an agent and minor credits.

“It’s tough,” she sighs. “It’s a rough struggle. Year after year you just hope that the year that comes is better than the one that just passed.”

Her days at Morton’s came to a merciful end not long after she had a chance to audition for a new, as yet unaired show on HBO called “True Blood.” She says the audition came about unremarkably and well before anyone knew what a sensation the series would be, riding the zeitgeist wave of vampire mania.

“I didn’t know a ton about the show,” she recalls. “I knew it was Alan Ball, and I think I knew it was about vampires. Just the idea of going in for an Alan Ball show was amazing to me, so I was really nervous. I loved ‘Six Feet Under’ and American Beauty. I knew [‘True Blood’] was going to be an amazing show, and this part, in particular, was going to be fabulous.”

She was right. From custom fashions courtesy of the show’s brilliant costume designer Audrey Fisher, who Klaveno is eager to gush about, to the fangs she gets to wield, the actress says she feels like she’s a little girl playing dress up.

“The only thing about the fangs is they prove challenging when speaking,” she begins. “The S’s are somewhat of a challenge, especially when you first start out. When you’re a bit more practiced, it gets easier. Stephen Moyer [who plays Bill] is the expert at talking with his fangs in. I have to wear them around on set before I’m doing a big fangy scene to get used to it. It takes some trickery.”

While Lorena is tremendous fun to play, she’s also a character fans love to hate. Especially now that there’s rampant speculation that Lorena was responsible for Bill’s kidnapping in last season’s cliffhanger ending (Anti-spoiler alert: I didn’t ask Klaveno if she had because I prefer to find out when the show comes back June 13.).

Lorena, and the actress who plays her, are a hot topic and a major source of contention among fans.

“I’m a little ignorant to that,” Klaveno admits. “I stay off the Web sites and blogs for a number of reasons, but mainly because I’ve had some bad experiences. You read things anonymous people say, and it can be really poisonous, sometimes the good or the bad. I worry that people hate me because my character is unlikable in a lot of ways, and people are really passionate about the show. It can be hard to distinguish between the actress and the character. But a lot of people have come up and been so excited about the show, and to be a part of that is amazing.”

Klaveno insists she’s as much a fan of the show as the people who take to message boards to discuss her role, with her own favorite characters and storylines.

“Pam!” she proclaims, when I ask who she enjoys watching the most. “She’s just fabulous, head to toe. I’ve become good friends with Kristin Bauer [who plays Pam], and we’ve discussed having Pam and Lorena have a Thelma & Louise adventure sometime.”