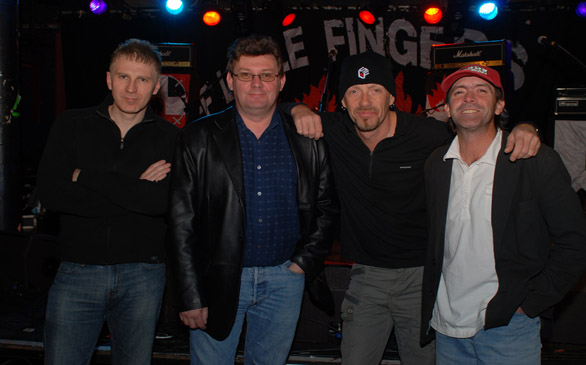 Jake Burns remembers the exact moment when he wanted to form a band. I interviewed the singer-guitarist and songwriter of Northern Ireland’s highly influential punk band Stiff Little Fingers by phone recently and was somewhat surprised to learn that he didn’t first get the rock ’n’ roll bug from hearing the Stooges or the Kinks. For Burns, it was seeing blues-rock guitar hero Rory Gallagher on television.

“I was 12 years old and had just been watching the football match on television,” he recalls. “Afterwards, Rory Gallagher’s first band Taste played, and I was glued to it ... just the way he played electric guitar; I had never seen anyone play guitar like that before.”

Enchanted by the lure of the electric guitar, Burns admits, “I wanted to be Rory Gallagher.”

But SLF have always been known for their bare-knuckle, political lyrics, so the desire to be a guitar god only went so far.

On their debut album Inflammable Material (1979), songs like “Alternative Ulster” and “Suspect Device” confronted head on what Burns calls “the darkest time” in modern Irish history: the Troubles. It was a time when the city center in Belfast was shut down at night with security gates, and police had broad powers to compel law and order. Inflammable Material’s raw guitar attack, forceful melody and righteously indignant lyrics (“We’re going to blow up in their face”) still sound as urgent today as they did then.

Burns’ embrace of this aggressive sound was not one-track. He credits the music of Bob Dylan and Hank Williams, Sr. with showing him how to write songs that meant something. He loved Black Sabbath and Deep Purple (SLF’s earliest incarnation was called Highway Star.), but grew tired of the moribund grandstanding of so much ’70s arena-rock. Steeped in the concise and pointed songwriting of Bob Marley and Graham Parker, Burns says that “when punk rock started happening, I was a natural convert.” Hearing the Clash for the first time was a revelation. He told his mates, “We could do that.”

Not many others shared his vision.

“There was no nightlife [in Belfast],” he recalls. “When we were first playing as a band and stuck our nose over the parapet, we saw there were only about 20 other people like us. And they were all in bands!”

Punk rock was a true subculture.

“We were indiscriminate,” he says of punk tastes in those days, citing the disparate sounds of Television, the Jam and especially Elvis Costello as influences.

“With punk rock,” he says, “we threw the rule book out the window and could see a future beyond what we were hearing.”

A future for punk rock? History has borne Burns’ vision. At the same time, he sees much of today’s pre-packaged punk style to be rigid. That is why so-called “mod revival” bands like the Jam “were considered punk, too.” After original bassist Ali McMordie quit the band (for a time), the Jam’s own Bruce Foxton joined SLF for 15 years, playing on four albums from 1991’s Flag and Emblems to 2003’s Guitar and Drum.

McMordie’s back, however, and gigging with his old bandmate Burns. New songs and a new album are in the works, but Burns doesn’t want to simply rehash any previous SLF sound.

“I love the sheer joy, sheer passion of writing,” says Burns of songwriting. “What angers me? What concerns me? That’s where the passion and enthusiasm comes from.”

A newer song called “Liars Club” is part of their setlist these days, reflecting a change of sound but no change of strong sentiment. It’s about former President George W. Bush and former UK Prime Minister Tony Blair, who tried to “excuse the inexcusable” by going forward to war in Iraq.

“I’ve also considered SLF in the tradition of protest singers,” he explains.

I have always thought of SLF’s music that way, too, since first hearing them. Though their songs have evolved, I have no doubt their next album will be as inflammable as their first.