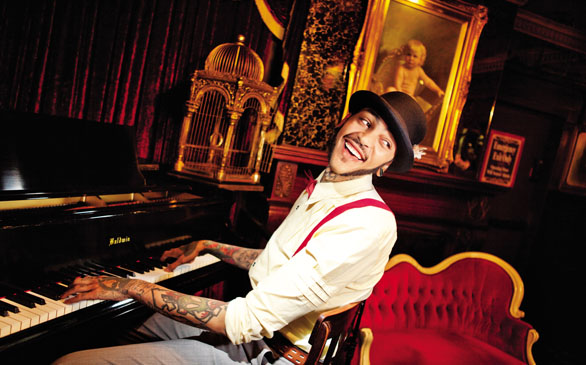 You may know him as the six-foot, five-inch, tatted-up frontman of the world-famous Gym Class Heroes, but underneath Travie McCoy’s exterior is a well-spoken, grounded individual with solo talent that is more than ready to be released to the world.

But for now, debuting this week is McCoy’s first solo album, Lazarus.

When asked about the title of this album, McCoy responds, “Well, Lazarus is my middle name, so originally it was going to be The Lazarus Project but after working with it, I decided to get rid of the Project and just keep Lazarus.”

When recording for the album started, McCoy explains that he was in a bad place; he had just broken up with his girlfriend (Katy Perry) and was hiding in a self-dug hole. The resulting music reflected this attitude, leaving the songs full of heartbreak and a lot of “self-pity.” The album was more than halfway finished when McCoy hit a turnpike; the good people he surrounded himself with brought him out of that mess. As any good friends do, they told him to get out of the house and go out and have some fun. Thankfully, he did. He started clubbing, hanging out with friends and just all around having a good time. This change in his personal attitude impacted him so much he decided to 86 his previous work and start from scratch.

The result are tracks like “Billionaire” featuring Bruno Mars, which clearly mirrors McCoy’s new, single, feel-good, jolly approach to life, as exemplified in its lyrics, “It’s been a couple months since I’ve single so/You can call me Travie Claus minus the Ho Ho/Get it, hehe.” It’s easy to hear his charming grin right after this line, one that fans have surely missed.

But what happened to the album that was originally already about 80 percent done?

“It’s not like that music is gone. It’ll probably come out some day,” he says.

McCoy reasons that he and Lazarus needed to go through this change, to go through the bad in order to get to the good. It was almost like a rebirth, which is fitting given the biblical story of Lazarus coming out of a cave and rising from the dead. McCoy came out of his own cave and brought with him records perfect for the summer.

Another factor that influenced McCoy’s “rebirth” was a break from his work to be an official ambassador of MTV’s Staying Alive Foundation, where he visited India, South Africa and the Philippines. The foundation is “an international mass media campaign working to prevent the spread of HIV and AIDS.”

McCoy feels that this not only helped influence his music, but just his overall approach to life. The Philippines in particular is where he experienced “extremes on both ends. Manila was so nice…,” but there was extreme poverty minutes away. He spoke with the High Priest about making their people aware of HIV and AIDS prevention and claimed he had some very interesting resulting conversations.

The album blends elements of hip-hop, indie rock, soul and something that is uniquely his musical taste.

McCoy recorded Lazarus in Los Angeles and Miami, the latter of which is his new hometown. He claims Miami has a lot of creative people that push you to get work done, despite its laid-back lifestyle. For this album, McCoy brought in help from a diverse group of talent, including the Stereotypes, Detail, the Smeezingtons, Evan “Kidd” Bogart, Lucas Secon and Josh Abraham.

McCoy is currently finishing up his first-ever solo tour, joining 3OH!3 and Cobra Starship on MTV’s “Too Fast For Love” tour that started in April. Kicking off the shows was I Fight Dragons. Up next for McCoy is more touring and promoting Lazarus.