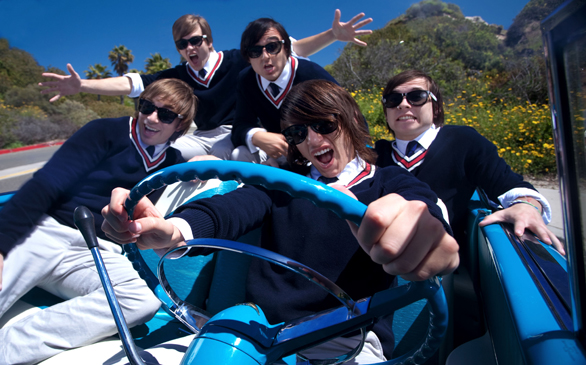 Fight Fair Get Their California Kicks

If you plan on spending some serious time at the beach this summer, you might want to check out Fight Fair’s California Kicks, an album that the band says is full of carefree beach aesthetics not seen since Frankie Avalon and Annette Funicello made their famous beach party movies.

“We wanted to take the music back to its roots and do something that’s classic but original for modern times and mix it with a kind of aggressive early punk style,” says Alex Bigman, singer for the San Diego-based group. “It’s like mixing the Ramones with the Beach Boys. We really wanted to do our own style and make something cool that people could relate to and have summertime fun to at the beach.”

Metallica Concert to Air in Theaters

Metallica, Slayer, Megadeth and Anthrax are all playing at the Sonisphere Festival in Sofia, Bulgaria, June 22, but fans won’t have to travel to Eastern Europe to catch the show. The “Big Four” have never before appeared together on the same stage, and show promoters are commemorating the rare event with a satellite broadcast directly into movie theaters all over the world.

The one-night-only global event will be broadcast in high definition to 20 Los Angeles area theaters, and the program begins at 7:30 p.m. Find theater locations and purchase advance tickets at TheBigFourLive.com.

Paul Gray, bassist for the band Slipknot, has died. Gray, 38, was found dead from as yet to be determined causes in a hotel room in the Des Moines, Iowa, area May 24.

“Paul was there from the very beginning, and none of us would be on the path we’re on now or have the sorts of life that we have now without him,” says percussionist Shawn “Clown” Crahan.

Drummer Joey Jordison adds, “It’s very hard for me right now. I just want to say that I love you Paul, and you’ll be sorely missed the world over.”

Gray is survived by his wife Brenna and the couple’s unborn daughter who is due to arrive in September. The remaining members of Slipknot have put together a 10-minute video tribute to Gray featuring previously unseen footage that can be viewed on YouTube.

Write a Song for Frank Turner

If you can write a song in a hurry or have one lying around already you may want to consider entering Frank Turner’s “Try This at Home” songwriting competition. The British singer-songwriter is about to release “Try This at Home,” a song from his current Epitaph album, Poetry of the Dead, as a single, and he’s looking for a B-side written by you. But entries are due by June 11.

“So quick, turn off your stereo, pick up that pen and paper – you could do much better than some skinny half-arsed English country singer,” says Turner.

Turner will record the winning entry and release it as the B-side of a special seven-inch vinyl version of “Try This at Home.” Details at Epitaph.com/demolition.

Guitarist Llexi Leon, the man behind the Eternal Descent gothic comic book series, is giving fans a chance to win an autographed guitar from Doc Coyle of God Forbid. God Forbid’s IV: Constitution of Treason provides the storyline for one of the new Eternal Descent titles.

The guitar up for grabs is an LTD V-200 ESP with a mahogany body, a maple neck and a rosewood fingerboard all in a black finish. The winner will be picked at random; details at EternalDescent.com/contest. Get your entry in by June 30.

Llexi Leon is currently in the studio working on his third release while simultaneously overseeing the publication of 24 Eternal Descent comics featuring bands such as Atreyu, Firewind and Static X.