Sex in His City 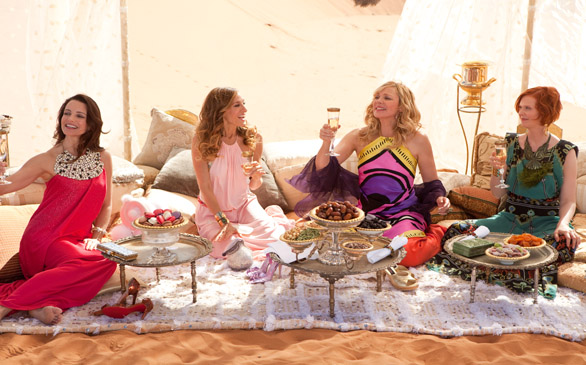 Does “Sex and the City” totally capture how women really are?
(Credit: Craig Blankenhorn)

Sex and the City 2 is currently in theaters raking in the cash, so to mark the occasion I thought I would take a page from the franchise and apply it to my column. I never watched the show when it was on television (mostly because there were no shootouts or martial arts sequences), but ultimately I gave in and so far have watched the first two seasons and the recently released film sequel. At the center of the show is Carrie Bradshaw’s sex column, which in addition to her narration, acts as a commentary on the adventures of the characters. Today I’m paying tribute to the show by writing my own “Sex and the City” column.

As a man, I always thought that trying to understand women was a waste of time, and the only phrases I needed to know when dealing with a woman was “uh huh,” “go on” and “really? Then what did you say?” When the mega-hit TV show “Sex and the City” was on television, I never watched it, not because I didn’t believe it was good, but because I needed a body count in my entertainment. After hearing from lots of girls that “Sex and the City” totally captures how women really are, I figured, “what the hell,” and started watching it from the first season on. While I was very entertained and kept coming back for more, I couldn’t help but wonder, “Is ‘Sex and the City’ making women’s lives more difficult?”

Before I elaborate on that, let me first say that I’m completely aware of the positive effects the show has had. From what I understand, “Sex and the City” made lots of women everywhere a lot more comfortable with their sexuality. If it’s true that the show made it OK for women to want sex and to be highly sexual, that would make me its biggest fan ever.

But I began to have the same concern about the show that I have about romantic comedy feature films. Normal people generally look up to and glorify characters in films and television. Not everyone who looks up to Bruce Willis’ characters are going to go blow stuff up, because the films he stars in lean more toward the extreme, but “Sex and the City” leans toward realism and the realer the characters are, the more regular people see themselves in them.

Is “Sex and the City” so true to life because women really behave that way? Or are women behaving like the characters in “Sex and the City,” therefore making it how women act in real life. At the end of the day it’s still a show, and scripted single-camera televisions shows, like films, are built on conflict and drama. In order for narratives to be interesting, there needs to be conflict. In essence: Someone’s going to be making someone else’s life difficult.

On top of that, the girls spend an awful lot of time obsessing about finding the perfect man, getting him to commit and getting him to settle down. I’m all for people getting what they want, but sometimes obsessing over something moves it farther from reach. Life has been very good to me and has blessed me with an abundance of the things I like, and what I’ve noticed is that all the things I wanted that came to me naturally were things I was totally cool and relaxed about, while things that I obsessed over didn’t come easily.

All that Law of Attraction crap is true, folks. When you obsess and focus all your energy on something, believe it or not, it puts your mind in a state of anxiety about it and it affects your judgment in actually receiving what you want. I realize there’s the whole biological clock thing for women, but that might not be such a problem if everyone wasn’t so focused on creating the perfect life before they do it. Animals don’t have that problem because they get right to it immediately. If you want a kid, go have one. It might not be the ideal fantasy situation from your dreams, but it’ll be something.

I know I’m probably coming off as an insensitive jerk who “doesn’t get it,” which is probably true, but hey, it sure hasn’t stopped the ladies from jumping onto my lap. Now if you excuse me, it’s time to start watching season 3.