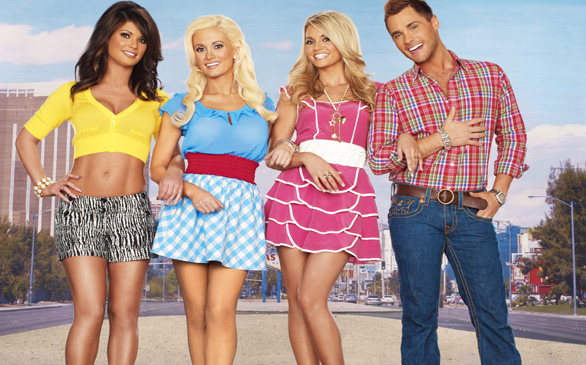 Isn’t that the life? Living in Sin City and having E! film you and your besties having fun in the infinite playground that is Las Vegas. This is the case for E!’s new show, “Holly’s World,” which follows “The Girls Next Door” star Holly Madison going about daily life with friends, Josh Strickland and Angel Porrino.

Tell us about your specific role in “Holly’s World.”

AP: Not only is Holly my boss, but she is also my best friend/big sister/role model/mentor.

JS: The cast is just a barrel of fun. Is there drama? Sure. But that happens in all families. At the end of the day we all love each other and just need to communicate better sometimes.

JS: One of the most down-to-earth and sweetest people I have ever met. I’m glad to call her my best friend. She works hard but knows how to let her hair down and enjoy hanging with the people she is close with.

AP: Holly’s the smartest, most beautiful woman that I know. I owe her everything.

Do you have a funny behind-the-scenes anecdote to share?

JS: Where do I start?! There are too many to list. One of us is always doing something silly and fun that gets all of us rolling on the floor and even had the crew cracking up along with us.

AP: At Holly’s housewarming, I walked in on someone boinking in my new bedroom ... on my bed – puke!