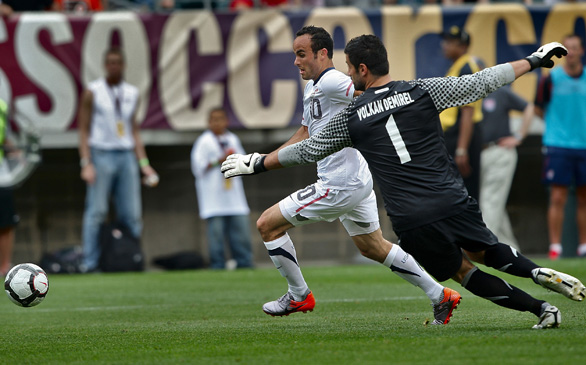 Remember Pele. Remember Maradona. Both soccer players practically became famous while competing in their respective World Cup soccer years. But now, the public will begin to acknowledge who Messi and Ronaldo are, perhaps.

Now it is time for another generation. It is time for the new guns to hit the pitch in South Africa. The most beautiful sports game’s tournament starts this Friday, June 11, as Mexico faces the host nation, South Africa, in the opening match at 7 a.m. PT.

A total of 32 squads are set to fight and hope for one dream to be accomplished. There are eight groups with four teams in each. Only the top two squads of each group advance to the round of 16.

This is actually a tough group to predict because most nations in it have had some form of success in prior World Cup appearances. More importantly, the four units have been playing well in their warm-up games.

For example, Mexico defeated defending champion Italy by a score of 2-1 on June 3 in Brussels, Belgium. The entire Italian federation was shocked by the result. Mexico controlled the tempo of the match, scored on two wonderful opportunities, defended well collectively and really put Italy into a chaotic state over the entire 90 minutes of play.

Uruguay is a powerful team arriving from South America, and could very easily win the group. However, the same could be said about the rest of the members.

France always seems to find a way to irritate its opponents on the field. Consequently, the French could land in the round of 16 with no surprise, but the true beautiful story of Group A lies with South Africa. Could this soccer team achieve what the nation’s rugby squad did in the 1995 Rugby World Cup? Very much so. In fact, what a team needs to win is just a form of inspiration. And South Africa is playing in its own land; that should say enough.

This group is a tricky one. On paper, Argentina is the favorite to arrive in first place, but a bit of controversy has this group in the air.

Arguably, the best soccer player ever, Diego Armando Maradona, is the current coach of the Argentine national power. Maradona has the best player in the world on his current roster, but forward Lionel Messi seems to struggle and underachieve with this team. Messi is simply magical with his club FC Barcelona of Spain, but he loses his touch when he’s with the national team.

Many argue that Argentina simply does not carry the same incredible talent that the Spanish club has, but that really should not be an obstacle for the Argentine phenomenon to produce this time around. Messi, along with the remaining offensive attack, can easily dominate a tournament like this summer’s World Cup. A lot of people are hoping Argentina does not win the tourney, but it is only because Maradona has promised to run naked through Buenos Aires if they are champions. Way to open your mouth, Maradona!

Both South Korea and Nigeria, are problematic teams for their respective opponents, and they can provide unexpected sparks for the viewing public, but Greece should be the other squad to advance to the round of 16. The former EuroCup champions have a solid roster and are led by a very good tactical coach.

The British are coming? No, not this time around. England has looked inconsistent in various games prior to this World Cup. They defeated Mexico 3-1 in early May, but Mexico controlled the pace of the affair and did not capitalize on its scoring chances. Overall, England has a lot of talent, a great coach in Italian Fabio Capello and awesome supporters, but the national team chokes often under the lights of this quadrennial event. It is inexplicable and incomprehensible how England has not been able to produce a championship for its country in the last few years. How England performs this year rests on forward Wayne Rooney and their entire back line because scoring and defending are their strengths.

With that said, the United States should be the surprise of this group and for the tournament, to say the least. Team USA has submitted a solid roster to FIFA, and it looks as if they will have a remarkable performance. Los Angeles Galaxy’s Landon Donovan leads the squad; he is the ultimate leader, inspiration and playmaker for the Americans while on the pitch. A solid defense, an improved midfield and a potent attack should give the U.S. first place, followed by England, Algeria and Slovenia, respectively.

Head Coach Bob Bradley included Galaxy’s forward Edson Buddle on the roster, particularly because Buddle has been a scoring machine in MLS thus far this season. Buddle leads the league with nine goals, and Bradley is aiming to somehow inspire Buddle to perform more of the same in South Africa. Some of the prominent players on the USA roster include Tim Howard, SoCal native Carlos Bocanegra and Jozy Altidore.

As usual, Germany carries a solid team. However, their latest injury to captain and midfielder Michael Ballack has many worried about their chances of winning. This is still a manageable group for the Germans, who should come out in first place, nonetheless.

Serbia and Australia have not given us much to talk about, but Ghana has. This African team has a lot of talent; the vast majority of the players compete in European clubs, and this is always a plus. Although Ghana has lost its best player in Michael Essien due to injury, they are expected to place second and thus advance to the round of 16.

This is a very intriguing group. The Netherlands are the obvious favorites, especially because of their physical and stylish tempo of play. Cameroon and Japan, along with Denmark, cannot be left out easily though.

Forward Samuel Eto’o leads the African squad in hopes of steering a wake-up call to those in the group. Cameroon can be the surprise of the group and the entire tourney, but their success depends on their defense and on them finishing their scoring opportunities.

Japan will compete up until the end, and that is dangerous. They have a good squad, and no one is counting on them to advance. Consequently, the Japanese could be very productive on the pitch.

Denmark, on the other hand, always underachieves in all of the tourneys they compete. So, look for more of the same.

Two words: Italy and Paraguay. Those two teams should advance to the round of 16 teams, but it could be in either numerical fashion. Italy is the defending champion, and they take a lot of pride in that. Their roster is filled with talent, but Paraguay is another South American talented unit that could very well have three wins after the group stage is complete.

New Zealand and Slovakia will present problems, but they are no real threats for the two obvious choices of the group. However, anything can happen in this tournament … anything!

Ahhh! The group of death presents much to talk about.

Brazil leads this group, and should win it after arduous matches. Former captain Dunga is the head coach, and he has requested only one thing from his players: to play simple soccer because it will be more productive. Dunga’s roster is filled with superstars including Kaká, Robinho, Maicon, Lúcio, Daniel Alves, Gilberto Silva, Júlio César and Luís Fabiano. However, the exclusion of Ronaldinho still has the world perplexed, but Dunga is quite the motivational leader and intelligent human being. He knows what he is doing. It has worked thus far. The only national soccer team to have qualified and competed in all of the World Cup tournaments, Brazil is one of the favorites to take the Cup home.

Portugal should follow Brazil, but the Ivory Coast can spark its way to second place easily. The highest paid soccer player is Portuguese Cristiano Ronaldo, and his success will dictate the overall production of the Europeans. Forward Didier Drogba is expected to have a magnificent group stage tournament with the Ivory Coast, but his opponents might have something to say about that. Look for North Korea to play well but not succeed. The other three teams are just too vigorous for the North Koreans.

This is a group that Spain will win, but the beauty lies in determining which remaining team will place second. It could easily be any of them. The fact of the matter is that Spain is a sure three game winner in the group stage. The Spanish are the favorites to win the Cup, as they are packed with talent. Even their subs could easily be starting on another national teams with no hesitation from the coaches.