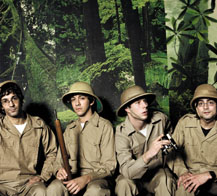 When Robbers on High Street got the opportunity to play with Cake and Gomez on this year’s Virgin College Mega Tour, they jumped at the chance. The opportunity to tour the nation’s universities in support of their new record Tree City seemed like the most fun that four boys from New York could have with their spring vacation. What they got, however, was another story.

"We were following the tour bus in our van," says Ben Trokan, shaking his head. "The busses had our name on it, but we were stuck driving our own little van."

The band from New York, used to the cramped, smoky intimacy of Big Apple clubs, did not take well to playing larger venues. "They didn’t fit us," laughs guitarist Steve Mercado. "I mean, we played a hockey arena."

Cool right? "No. Not cool. The sound was horrible." Other than the less than perfect sound and "the most backward tour planning of all time," Robbers still managed to have a great time on the road.

Combining the pop sensibilities of The Strokes, the layered dynamics of Elvis Costello and the charm of Spoon, Robbers may not have the most groundbreaking sounds, but they make up for it by creating solidly loveable tracks that listeners find themselves singing to for weeks at a time.

The band, which features Ben Trokan on guitar, piano and lead vocals, Steve Mercado on guitar, Tomer Danan on drums and cymbals and Morgan Phillips on bass, is poised to take a solid step into the big leagues. After releasing their debut EP, Fine Lines, Robbers rode a wave of well deserved buzz, delighting audiences and reviewers alike with the arrival of their first full length, Tree City, in February.

Critic reaction to this record has been almost uniformly positive, with some hailing Robbers as the band to watch in 2005. Their catchy hooks and self-consciously subtle lyrics draw listeners in through their radios, leaving them wanting more when the album’s 13 tracks end.

Trokan’s approach to songwriting is one that emphasizes the positive aspects of the world as opposed to the negative. "I’m not one of those songwriters that has to put how tortured I am into every song," the singer explains. "I don’t think I’m that tortured."

Robbers on High Street strive to incorporate a number of influences, from Britpop to the raw New York sound. However, Trokan admits, "I don’t think there is a New York sound; there are a million New York sounds. If people want to lump us into that, fine," he says with an exasperated shrug.

The songs on Tree City run the gamut of styles and tempos. Tracks such as "Japanese Girls" make the listener want to get up and dance, while "Amanda Green" begs to be played at full volume in a convertible, with the driver singing along louder than the music. The songs are short and poppy, accessible without being empty.

The band isn’t resting on their laurels, though, with a successful debut and a warm reception on their latest nationwide tour. And for most of the rest of this year, Robbers will be married to the road.

Though most bands would answer that their future plans are to "take over the world," bassist Phillips has a better idea. "We are going to herd people into shows, and then slaughter them with rock."

Tree City is currently available. Robbers on High Street will be performing with Hot Hot Heat June 15 at the House of Blues Anaheim. For more information, visit www.robbersonhighstreet.com.