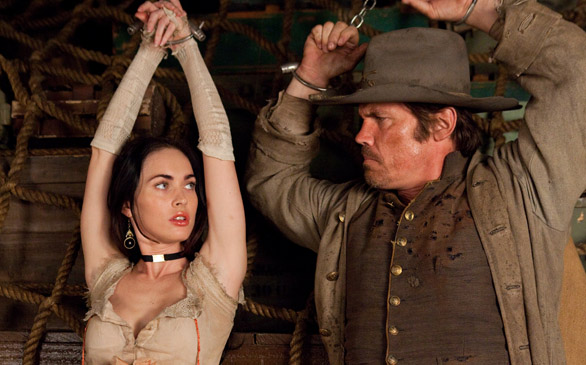 He watched his beloved wife and son burn down in their tiny log cabin as he hung nailed to a cross. His archenemy, Quentin Turnbull, called it retribution for the murder of his own son. As the final seal on his ugly deed, Turnbull branded him for the rest of his days with a flesh-searing scar on the side of his face and left him for dead. A nearby tribe of Native Americans brought him back to life, but he’s not the man he used to be. He’s darker, his demons are great, and now he’s even got a nifty superpower of sorts: Homie can talk to the dead. World, meet Jonah Hex.

The famed comic book character is the latest in a long line of beloved protagonists to get his turn on the big screen. DC Comics has partnered with Warner Bros. and placed Jimmy Hayward in the coveted position of director. Under his skilled eye, Hayward leads an all-star cast including Josh Brolin in the title role, funnyman Will Arnett as Lt. Grass, John Malkovich as the villain Turnbull and the world’s most talked about “It” girl, Megan Fox, as Lilah, Hex’s tough-as-nails love interest.

Hex’s story is set against a largely unfamiliar backdrop for most comic book fans. It’s not based in the tough streets of Gotham or in a thriving contemporary metropolis. Jonah Hex takes place during the 1800s, just at the end of the Civil War as the United States gears up to celebrate the centennial. Turnbull, who is probably the first American terrorist, has devised a plan to deliver a victory back to the confederacy by destroying the country. He has put together a superweapon, which has the ability to level everything in its wake. After being enlisted by the government, Jonah gathers much-needed information from the dead and uses it to put an end to Turnbull’s plan. But it doesn’t come without one hell of a body count.

“The intention is to leave the movie feeling puffed up and ready to pop a cap in someone’s ass,” says Brolin.

The filmmakers felt that it would be important for the film to reach a wider audience with a PG-13 rating instead of an “R.” Fans will probably miss out on the cartoonish and blood-spurting killings that run rampant in other big-screen adaptations, but the violence and testosterone is still very much on display. The fight sequences are shot with a fast and loose nod to Westerns as well as noir and grip the viewer like a vice.

Even Fox stands up to a litany of bad guys as the gun-toting hooker with a heart of gold. In binding corsets, she covers Jonah’s back while running, shooting and knifing her way out of danger. Fox’s most stunning attributes are on full display in the action drama, much to the starlet’s delight.

“I loved the corset,” she says. “I enjoyed it. I wish they would come back in style.”

This enthusiasm may seem a stark contrast from the press the actress has received since it was announced that she won’t be returning to the Transformers franchise. Fox seems hip to the gossip and the backlash, but she hasn’t lost her spunk or sense of humor, despite reports that her alleged prima donna attitude led to her dismissal.

About working on Jonah Hex with her latest director and team of tough guys, Fox doesn’t miss a beat.

“I’m all full of candy canes and lollipops,” she jokes.

The 24-year-old actress does concede that even with the attention to detail and authenticity that the filmmakers put into Jonah Hex, there will still be fans who are not totally satisfied with the outcome.

But Hayward feels that, ultimately, the Jonah Hex character is brash and daring enough to win fans over.

“When Josh Brolin is playing Jonah Hex, he carries that complete badass attitude,” he notes. “He carries the scar as if it’s been with him all his life, and all you’ve got to do is look in his eyes to see everything you need to know about Jonah Hex.”