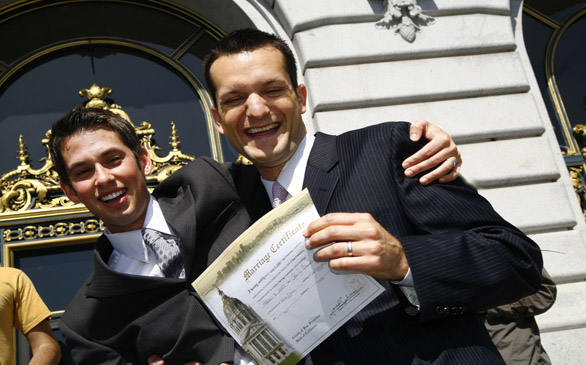 8: The Mormon Proposition arrives two years after the first gay marriages took place in California. The film’s release celebrates the anniversary of the first homosexual couples who were married on June 17, 2008.

The film addresses the timeless debate of whether gay marriage should be allowed or not. Not surprisingly, it focuses on Utah and California.

The film takes a respectable stab at unveiling new truths about the controversial Proposition 8 and gay rights, but it doesn’t quite cut it.

What’s unique about this film’s argument is that it isn’t necessarily fighting the government; it attempts to strip down the alleged inconsistencies of the Mormon Church.

Director Reed Cowan’s original intent was to create a documentary about gay teen homelessness and suicide in Utah, but as films can sometimes do, 8 shifted in direction and took on a life of its own.

Producers Bruce Bastian, Steven Greenstreet, Emily Pearson and Cowan grew up Mormon and are now questioning the religion and the practices of Mormon believers. It can’t be easy growing up gay in the Mormon Church. You’re forced to sacrifice either your heart or your faith.

While it does harp on an issue that has been debated ad nauseam, 8 identifies many valid points and allows viewers to question the relationship of church and the government. It gives a face to homosexuals who either were or are Mormon.

The film stands firmly against the Mormon Church; the filmmakers believe the Church manipulates the government with money and half-truths regarding gay rights. 8 also exposes the Mormon Church’s secretive involvement to ban gay marriage.

According to Cowan, “This film represents how people feel and how their feelings were walked all over by a group of people who claim to carry the mantle of healing.”

Luckily, it’s not excessively lengthy. Documentaries are notorious for being too drawn out, but Cowan thankfully keeps it brief.

It’s always challenging for a documentary to be visually pleasing, but 8 manages to achieve that. The film has credibility and includes great interviews with intelligent sources.

Although going on and on about something in particular doesn’t work for everyone, 8 doesn’t let up on this subject matter. You’ve got to give it credit for that; it holds a solid stance. Its efforts deserve an audience.