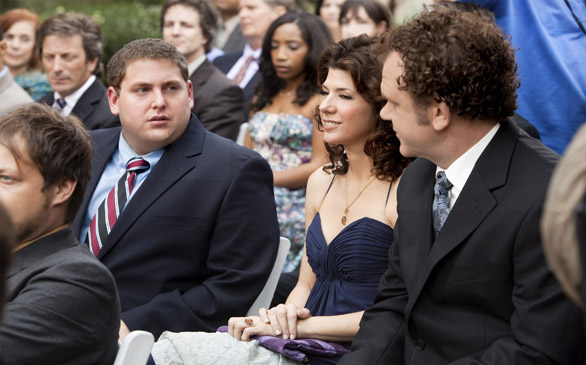 Cyrus follows John, a down-and-out divorcée played by John C. Reilly, who has all but given up on romance. When he meets the woman of his dreams during a drunken rendition of “Don’t You Want Me Baby,” his second chance at love is reignited.

Only problem is, as if you didn’t already guess, that Molly, played by the still-hot-at-the-age-of-46 Marisa Tomei, quite literally has a large elephant in the room, a 21-year-old son named Cyrus. Played with surprising restraint by Jonah Hill, Cyrus is one of those title-leading characters that simply owns the screen – no small feat considering the talent on hand here.

The rest of the movie follows what you might have heard or seen in trailers or synopsis, though there are more than a few surprises on hand. Directors Mark and Jay Duplass, who have been featured at Sundance for their low-budget films several years prior, have a very interesting (and borderline annoying) visual style that is not unlike watching an episode of “The Office.”

They get the camera in close, racking focus here and there and generally getting on your nerves until you get adjusted to the bizarre format. Once you do, however, one is engrossed in the story unlike any other format I can think of. We are, quite simply, thrown into the scene.

Couple this with their extensive improvisational methods, and we are left with scenes that seem far more natural than actors hitting lines on marks in a box. Outside of the idea that Hill at some point fit in the body of his on-screen mother Marisa Tomei, this is a markedly notable movie because of how real it all seems. And this is a good thing.

Cyrus is a comedic treat both for its material and strong performances. Reilly has never been better here as the flawed divorcée, and his wits are matched scene for scene against Jonah Hill, whose breakthrough performance will really impress a lot of people. The characters are real, the scenarios are (kind of) real and for the most part, it’s damn near impossible not to leave the theater with a big fat smile on your face.