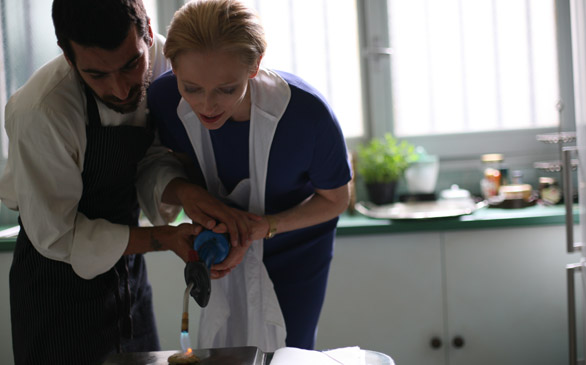 Edoardo Gabbriellini and Tilda Swinton in I Am Love
(Credit: Courtesy of Magnolia Pictures)

In the spirit of Tampopo and Babette’s Feast, I Am Love is an exploration of sensuality inspired by food. Taste, touch, smell and feel become as important to this film as sight, though director Luca Guadagnino does an outstanding job of transporting audiences to an austerely elegant world that feels trapped somewhere between the 1930s and modern-day Milan.

Tilda Swinton stars as Emma Recchi, the matriarch of a wealthy Milanese family that seems to spend all of its time hosting lavish parties and attending luxurious lunches when not bickering over who will helm the family’s successful textile business that is passed down from the dying patriarch to his son Tancredi (Pippo Delbono) and grandson Edoardo (Flavio Parenti) in the film’s opening scene.

Swinton, always a stunning performer, continues to turn in stellar work, this time in both Italian and Russian. The Scottish actress utters only a single phrase in English during the entire course of the film, and that one moment is halting and heavily accented. Moving from caged and frigid to awash and adrift in the proverbial sea of love, Swinton’s ability to illustrate Emma’s emotional journey with the slightest flicker across her alabaster visage is absolutely transcendent.

With a sparse script, Guadagnino treats his film like a canvas, painting Swinton into costumes seemingly built for Grace Kelly and enveloping the audience in a grand world of Italian prestige before dipping the brush into pastoral scenes that drip over the screen like honey.

The film’s major flaw, however, is the director’s occasional reliance on beauty and art over narrative. Guadagnino can become trapped in the majesty of his camera lens, lending to a two-hour running time that sags in the middle and forces an ending that’s a truncated flurry accompanied by overly dramatic and clanging music by renowned minimalist composer John Adams, who creates a soundtrack of contrarian tones.

I Am Love releases in select theaters June 18.