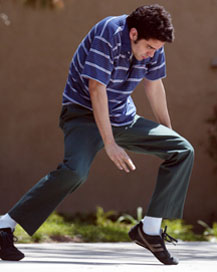 The skinny dude in the orange sweatshirt and khakis starts to dance almost shyly.

Punch the air, bob the head.

Because the dancer – David Bernal of Santa Ana – is now moving like people really aren’t supposed to move.

He looks possessed by a herky-jerky robot. His legs turn to rubber, rippling in waves.

Now muscles and bones look like they’re flowing independently of – yet in rhythm with – each other, all at the same time.

In just under a minute, the routine is finished. The crowd goes berserk and Bernal smiles softly. The video fades to black.

Though Bernal had no inkling at the time, his performance at that 2001 talent show would change his life.

For when the clip found its way to the Internet a year later, it was an instant sensation.

Some of those e-mails offered jobs, and Bernal decided to postpone plans for a career in graphic design to see where dancing might take him. Three years later, his work is being seen by more and more people.

He has performed on "Jimmy Kimmel Live," "Tonight" and "The Steve Harvey Show."

He danced in the movie You Got Served, and in television commercials for 7-Eleven, Heineken and Volkswagen, the last another Internet buzz clip for its hip-hop take on Gene Kelly’s famed "Singing In The Rain" routine.

"It’s the kind of thing that people are left with their mouth hanging open," said Terry Lindholm, Bernal’s agent.

During lunch, kids would gather in the quad, showing off their break dancing moves, drawing a crowd of onlookers.

Bernal had seen break dancing and house dancing at raves, and now school, and thought it looked like fun.

After months of practicing in private, friends shoved him into the dance circle at lunch one day.

"I thought, ‘All right, I’m here, I might as well do it.’ When I started dancing, everybody started rushing the quad."

Through college, Bernal danced mostly for fun, occasionally making $80 or $100 for small performances.

As he danced, his style evolved until it became something entirely his own creation, something he describes in terms outside the realm of traditional dance.

"What I’m trying to accomplish with my movements, I want to look alien; I want to transform into an animal," Bernal said. "Or things. I’ll imagine myself into water or air.

The organizers of Kollaboration, a Korean-American talent show in Los Angeles, met Bernal’s former agent while painting his house. They came away from the job with a videotape of Bernal and the idea to spring him on the unsuspecting crowd.

A year later, when the video went up on www.kollaboration.org, its daily traffic jumped from 500 to 5,000, spiking to 40,000 hits a day after Ellen DeGeneres aired it on her television show a year ago, said Paul Kim, a Kollaboration founder.

"It went crazy – 2.5 million viewers in two years," Kim said. "And I know it’s been seen a lot more than that because I’ve seen it posted on hundreds of sites besides ours."

When the Kollaboration clip went massive, Bernal was putting together his portfolio, about to graduate from California State University, Long Beach with a degree in illustration.

The jobs started to pay better – the TV talk shows paid about $800 for an appearance – and he eventually shot, edited and produced a video of himself and other underground dance artists, selling it through a Web site he created – www.detoursvideo.com.

Still, he worked part time as a video editor and graphic artist until recently, when the TV commercials – which have paid $6,000 to $30,000 – started coming in. Along with better paychecks came the opportunity to travel – the Heineken ad was shot in Mexico City, the Volkswagen Golf GTI ad in London.

Even his father, Juan Bernal, has mostly overcome his original concerns that his son was not using his college degree for a more stable career.

"I’m an old traditionalist, I’d like to see him use his degree," Juan Bernal said. "But (David) is an adult and he makes his own choices. He has to go where his inclination leads and where his talents take him.

"So I’m happy he’s found something he enjoys and has gotten some recognition for it."

"After he completes a project, it’s amazing how there’s almost an instant ball of buzz around it," Lindhold said. "It’s like a ball, rolling down the road, getting faster and faster."

For now, Bernal, is happy to ride that ball as far as it will take him.

"You can only dance so long," he said. "Your body breaks down.

"But where I’m at right now is, I’m going to milk this for as long as I can."

As for the name Elsewhere, it’s how he sees himself and where his art is headed, Bernal said.

"I almost become my movements, so in a sense, I’m not there anymore," he said. "I’m trying to take my dance style somewhere else – elsewhere."