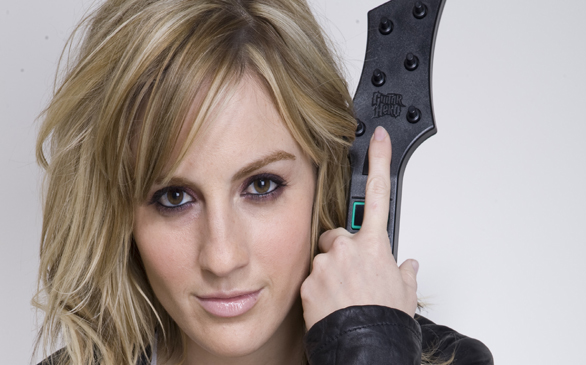 What is it about the girl next door? Is it: that it seems like she has known you forever, her natural good looks, the fact that she gets along with the girls and the guys or maybe it’s that she can whoop your ass on the Xbox and handle a machine gun at the same time?

She may seem like the girl next door, but Alison Haislip is much more than just a pretty face.

Hosting several segments and specials for television network G4, Haislip has made her mark on the entertainment world. Interviewing celebrities and partaking in some of the biggest underground events around the world, she has been privy to a string of amazing opportunities.

But where did this all begin?

Haislip sounds off, “When I was a kid my parents had an Atari 2600. I played that thing all the time. My favorite game was ‘Tanks,’ but, of course, later I learned that it was called ‘Combat.’”

“I remember going to my grandma’s and bringing the video game system,” she recalls. “Plugging it into her color TV, and that changed my world. I had no idea video games came in color!”

But it was moments like that and getting her 8-bit Nintendo system at age 8 that paved the way for her career.

“The first game I beat was ‘DuckTales.’ I even took a picture of the final screen and sent it in to Nintendo Power, and it got published!”

With this kind of love, it’s no wonder that Haislip has found herself taking over the TV waves and owning the video game world. Not an easy task when most players are guys, and girls rarely get a shot to show their skills. It would seem that it wasn’t just the Nintendo system at age 8 and the Atari at birth that got things moving.

“When I was in college at Boston I was the only girl in a ‘GoldenEye’ club.”

But it’s not all video games for this gal. On June 3, Haislip premiered in a whole new light on the G4 special, “Tomorrow’s Warrior.” This aggressive production took Haislip and co-host Weston Scott on two days of intensive military training and instead of reporting on the action, they were the action.

The duo was paired up with C.R.I. – Counter Terrorism Training School in Nevada. C.R.I. is comprised of expert instructors who formerly belonged to the Israeli Special Forces. These are the guys that train U.S. Military Special Forces and SWAT teams. So what did they have in store for Haislip?

“The morning of the first day I was riding a WaveRunner through Lake Mead with Weston on the back firing a gun at targets, and at night I was clearing a house full of bad guys. When your regular day is putting on military gear and night vision goggles and learning how to strap on a gun holster … There’s no strip clubs or gambling on this Vegas trip.”

So, being a video game guru whose favorite game series is “Left 4 Dead,” the action should have been no biggie, right?

“I feel safe on every shoot I do for G4, but every once in a blue moon I think, ‘Someone can get hurt doing this.’ Especially when I was doing our boat-to-boat combat shoot with the drivers battling each other.”

The L.A.-based gal is also the co-host of the hit competition “American Ninja Warrior,” which took her to Japan, where real-life ninjas-in-training compete on a course that would challenge most Olympians.

“I have ‘American Ninja Warrior’ coming up again [this fall] with Blair Herter,” she relays. “We will be taking [the show] over to Japan again. Really excited for that. It was one of the highest rated shows on the network for the year!”