Bruno Mars: Ain’t Got Nothin’ on This Triple Threat 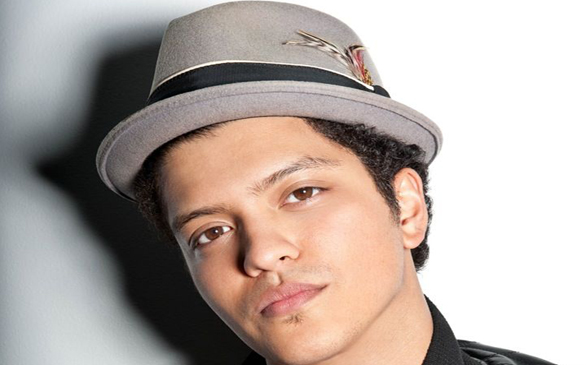 You may recognize Bruno Mars as the sweet vocalist on hits like “Nothin’ on You” by B.o.B and “Billionaire” by Travie McCoy. But soon you’ll come to remember him for his solo work, which is bursting with talent. His four-track debut EP, It’s Better If You Don’t Understand, was released last month, and you can expect his full-length album sometime this year.

On the EP is “Count On Me,” which is simply Mars’ voice and an acoustic guitar that he describes as “a sweetie type song … with extra sugar. I want people to envision it as a song that you serenade to your girl or a mother serenades to her daughter. Its lyrics are about, ‘I’m your friend first before anything.’”

Also on the EP is a tune that sets hearts aflutter, “Somewhere in Brooklyn,” which acts as an open letter to a girl who “was covered in leather and gold, 21 years old” whom he met at a train station. But before he could catch her name, “along came a train … next stop, Brooklyn.” Imagine being that girl, would you try and find him?

Growing up in Honolulu, Hawaii, Mars (born Peter Hernandez) knew music was going to be his life.

“I moved out to L.A. [after high school graduation] to pursue my solo artist thing, but it wasn’t working out too well,” he says. “On the very last session that I had, I met Philip Lawrence. [We] just went really well together; he was a clown who didn’t take himself too seriously. You know, I’m just happy I’m doing music and singing and writing songs, and he was the exact same way. We were both kind of struggling together, and he was a believer in me. He really wanted me to keep going and pursue my artist thing.”

“So we started doing shows around L.A. together and continued to write songs until labels were asking us [if they could] take the songs we wrote for their artists,” Mars continues. “Well, we were both very broke, so the ‘artist thing’ had to be pushed to the side. Then I asked him, ‘You want to team up and become a whole production group? We’ve seen other cats do it, we can do it, right?’ So we started producing, and we’ve been really lucky to have been successful.”

This production team, the Smeezingtons, is responsible for hits such as Flo Rida’s “Right Round.”

Returning to the present, Mars discusses how the “Nothin’ on You” collaboration came about.

“I remember meeting B.o.B at a studio,” he begins. “I had been a fan of his. He had this song, ‘Haterz Everywhere We Go,’ which was a really Down South type of record, and I love that shit. But he was playing guitar in the studio doing Coldplay and John Mayer.”

That’s when Mars thought, “Man, I wonder if people know he can play like this.”

He continues, “So we [the Smeezingtons] did the track and hook of ‘Nothin’ on You,’ gave it over to Atlantic Records and invited B.o.B to put his spin on it. This was my first record, the first time the radio ever heard my voice. I never believed in a record so much as I believed in that one. I prayed that people would accept this tempo and this rapper from the South – this aggressive, cool, throwback guy and me with my ‘Candy Land’ voice, my Care Bear voice.”

Seeing as how “Nothin on You” has topped charts for weeks now, it is clear Mars’ prayers were answered. Audiences can’t get enough of his “Care Bear” voice and sweet personality to match.