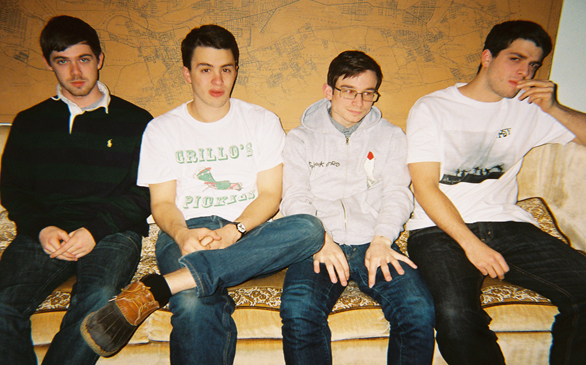 It’s a Wednesday night, and Beverly Boulevard off Alvarado Street is completely empty, the only people out in this hipster junction are the fans lined up outside the Bootleg Theater. Little to their knowledge, the band they’re eagerly waiting for is inside a cramped tour van a couple of feet away for an interview. I called shotgun while guitarist Luke Paquin sits as driver. The kids in the backseat: lead singer Steve Bays and drummer Paul Hawley, who together have been with the band since it started in 1999.

There is a heated debate whether I should move to Vancouver and if mellower living beats big-city life.

“I can’t handle it here. When I’m here I feel pent up. I feel like there’s too many people. And it’s not just L.A. It’s just big cities,” says Bays.

For Hot Hot Heat, Los Angeles is their new home as they promote their new album, Future Breeds, with a monthlong residency at the Bootleg Theater, headlining shows there every Wednesday in June. The venue is small and intimate where no person stands more than a couple of feet from the stage, a long departure from touring packed amphitheaters with Weezer, Foo Fighters and Snow Patrol.

“We said we were going to treat this album like we were a new band and that meant basically scrapping everything we’d done in the past and keeping a few key people. Other than that we sort of started from scratch. I didn’t want to just book a big tour and assume people are going to show up. I mean it took us a couple of years to make our album. I want to treat it like we’re a new band,” says Bays.

For the past couple of years, Hot Hot Heat has been living in Vancouver, creating tracks in a makeshift studio they built themselves. Since leaving major record label Warner Bros., the band is now creating music on its own terms. Though they all agree the split was amicable, you can’t help but notice a little bit of tension around the topic.

Says Bays, “Because of our deal with them, it was from the old school days when they still sold records. They would of owed us a shit ton of money for this record, so they were actually secretly psyched to get out of it, but we were supposed to do another record [with them].”

Though Future Breeds is now released under label Dangerbird Records, home of Silversun Pickups and Sea Wolf, being on an indie label is no different than being on a major label like Warner.

“People look at major record labels as some sort of ascension to this blissful wonderful place. But the fact is we’re a working band, and we’re not going to be on the same label forever. I knew that when we were on Warner, and I know that now,” Hawley says.

L.A. native Paquin sums up how, despite the label move, Future Breeds was an album free of restrictions.

“I think we were trying to think less about it than ever before because we worried about that stuff in the past,” he says. “But I think the idea of locking ourselves in a room and making music that impressed one another is pretty exciting.”

Because of this new attitude, the album has a harder edge to it than the catchy synth pop we’re used to. Still Hot Hot Heat hasn’t totally changed on us. One can call their whole ordeal a metamorphosis – still keeping their soul, while looking and sounding at a higher level beyond the expectations of music executives.

As nighttime falls, the van faces a downward slope into the hazy lighting of downtown L.A. Our debate between the small-town feelings of Vancouver to big-city life has drifted to topics about beavers, crime rates and whether Canadians are generally rude.

“I never experienced that as an outsider living there,” says Paquin.

“Well everyone on the East Coast is more blunt, where in Vancouver you secretly keep it to yourself. There’s this weird passive-aggressive tension,” says Bays.

“That’s just your parents,” adds Hawley, as we all laugh in the van.