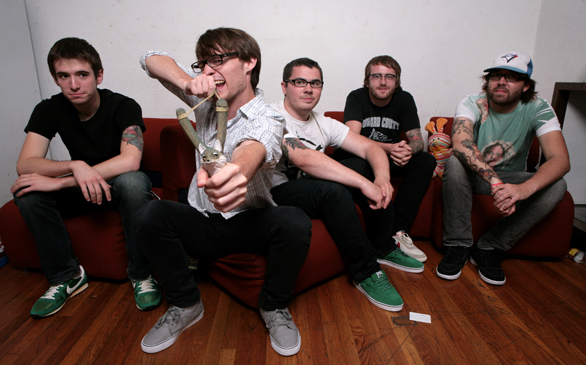 Pardon the pun, but with a name like theirs, it should come as no surprise that post-hardcore act Polar Bear Club’s effect on listeners is, well, polarizing. But while audiences and critics may struggle to figure out where the Rochester-bred rockers fit into the musical spectrum, the band is content to channel their inner chameleons and leave the labels for lesser bands.

Sounding like the grizzled punk-rock lifers found in seedy bars on the Sunset Strip hanging out with Tim Armstrong, while looking slightly more of a Williamsburg residence, the band has had no trouble blending in seamlessly across genres. But despite the ease with which Polar Bear Club could become a trendy-sounding and -looking band, Stadt much prefers having substance over style.

“I think people respond to passion, honesty and emotion. That’s universal,” says Stadt. “I want to see an honest dude up there who’s expressing himself truthfully. It may not be my truth, but it’s a truth, and I can relate to that. I’m more interested in faults and imperfections than the Auto-Tune and the gloss.”

Conjuring the anthemic quality of early Rise Against and Against Me! with the emotional honesty of his touring mates Thrice and Gaslight Anthem, it’s clear in Stadt’s melodic yell-along growls that he lives by the same principle for his own songwriting.

“We say what we mean, and we mean what we say,” says Stadt. “We come from an era when punk rock would get your ass kicked at school even though right now that’s not so much the case. We do this because we love it. There’s a lot wrong with bands now, and we want to do it the way that we think is honest.”

One listen to the band’s latest album, last year’s Chasing Hamburg, and you’ll find that Stadt’s truth is one you can ascribe to as well.