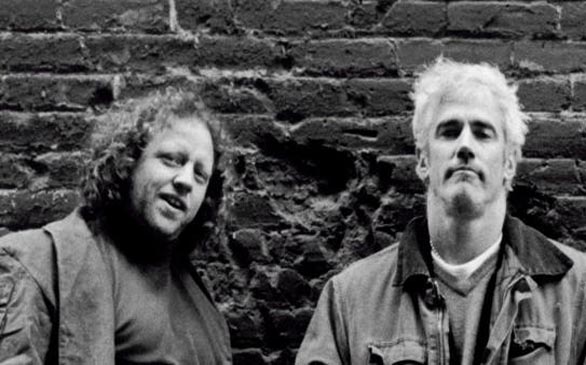 Permanent Ability Bring It On!

Jim Wirt, noted for his work with No Doubt, Incubus and Hoobastank, has produced Bring It On!, the new one from L.A.-based funk-rockers Permanent Ability. The band features frontman Brian Lanese, who is a three-time Emmy Award winner and a distant relative of Samuel Clemmons, the late American writer better known as Mark Twain.

But trivia aside, Permanent Ability would rather be known for their raucous live show, a spectacle you can witness at the Puka Bar in Long Beach June 26. Bring It On! drops June 28.

If you’re one of the nearly half million people that follow Ernie Halter on various social media sites, you know that he likes to interpret other people’s songs and you won’t be surprised to find a Coldplay cover (“In My Place”) and a version of Squeeze’s “Black Coffee in Bed” tucked into the song list on his new album. But Franklin & Vermont mostly holds original music inspired by the quiet Los Feliz neighborhood near the cross streets name-checked in the album title. Halter plays about 100 gigs a year and says that Franklin & Vermont was meant to remind him of the serenity of home while also capturing the energy of a live show.

“I wanted the record to carry with me a piece of home since I spend so much time on the road,” says the singer-songwriter. “It’s easy to lose something in translation; easy to lose the magic of a live performance when making a record. But for the first time I feel like I really got it.”

Franklin & Vermont drops June 29, and you can see Halter in concert July 11 at Saint Rocke in Hermosa Beach.

Noel and Liam Gallagher may not care to work with each other at the moment, but the often at-odds brothers accomplished quite a feat over the course of 15 years with Oasis; eight No. 1 hit singles and 15 more that reached the Top 10. Now Big Brother and Columbia Records have collected all the hit singles (26 U.K. A-sides in all) in a two-CD compilation called Time Flies…1994-2009.

The “standard North American” version of Time Flies is packed with over two hours of favorites like “Champagne Supernova,” “Cigarettes & Alcohol,” “The Hindu Times” and a first-time-ever-on-CD bonus cut, “Whatever.” Big fans of Oasis will want to seek out either or both import versions of the collection. The Deluxe Limited Edition four-disc version includes a DVD with 38 promotional video clips and a CD featuring the last-ever recorded Oasis concert taped at the Roundhouse in London in July 2009. A five-L.P. vinyl version is also available. All versions of Time Flies…1994-2009 were released this week.

Stuart Cable, the former drummer for Stereophonics, has died. Emergency services pronounced the musician dead after they were called to his home in Wales on the morning of June 7.

Cable had a 10-year stint with Stereophonics, but the band fired him in the early ’90s, partly because of the amount of time he was devoting to his career in radio. Cable hosted a rock show on BBC Wales and broadcast his show as usual just two days before his death. He was also active as a member of the band Killing for Company.

The cause of Cable’s death had yet to be determined at press time; the drummer was 40 years old.

Squeak E. Clean and DJ Zegon, the masterminds behind hip-hop collective N.A.S.A., are blasting off into space again with The Big Bang, a remixed version of their The Spirit of Apollo album. Herve, Mr. Oizo, the Ashton Shuffle, Villains, Steve Aoki and many others reimagine the original track listing while two completely new songs, “The Big Bang” and “I Wanna Be Your Lover,” both featuring Max Hedrum, have been appended.

“Prepare yourselves earthlings,” says spacecraft mission director Squeak E. Clean. “This is the beginning and it will only grow from here into a chain reaction of emotion that will echo throughout the universe!”

The Big Bang blows up June 30.