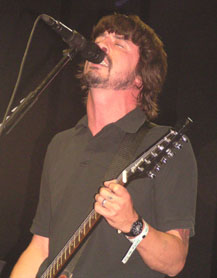 As its name suggests, the 2005 KROQ Weenie Roast is one big party complete with beach balls, beer, bikinis and even a Ferris wheel. The annual charity event isn’t only about partying and baking in the sun though. The real reason this show sells out in minutes every year is, of course, the music.

Audioslave mesmerized with a performance that left many in the 15,000-plus crowd breathless. After playing a few hits from their self-titled debut and their newest single "Be Yourself" from Out of Exile, the quartet dug into their collective band histories of Rage Against the Machine and Soundgarden to deliver versions of beloved songs that haven’t been witnessed by a crowd this size in years. Chris Cornell’s trademark howl echoed to the back of the lawn, but there was no comparison to the noise that guitar virtuoso Tom Morello’s riffs drew from the audience during an instrumental "Bulls on Parade" leading into "Sleep Now in the Fire." Cornell brought the noise level back down before taking everyone’s breath away with an acoustic "Black Hole Sun." The four rock giants lead us through their version of "Killing in the Name" before ending their set with "Cochise."

What band could follow a performance like that? Foo Fighters, that’s who. One of the best live bands around did not disappoint as their ever-charismatic leader Dave Grohl shredded through "Learn to Fly," "Times Like These" and the brand new "The Best of You" from the upcoming In Your Honor. Green laser lights darted through the air as the lyrics of "Everlong" soothed the sunburned crowd. This was the calm before the storm known as "Stacked Actors," during which Grohl notoriously runs through the crowd and dodges panicked security to stand up on chair backs and triumphantly wave his guitar in the air before climbing up, over and through the pit back to the stage. Not one to go unnoticed behind Grohl’s stories or his drum kit, Taylor Hawkins drew eyes as he thundered through "All My Life."

What a year it’s been for The Killers. Last Roast, the group played to a crowd more interested in surviving the blistering sun than hearing what the band had to offer onstage. But the Las Vegas quartet was definitely what the Hot Fuss was about this year. Virtually every body in the house was dancing to "Mr. Brightside" and singing along to a song that isn’t even on Hot Fuss, "Indie Rock and Roll." Maybe the band is more comfortable playing to such massive crowds now. Maybe it’s the arrogant yet endearing boyishness of Brandon Flowers. Or maybe it’s just their infectious melodies that captivated the audience, making The Killers a force that can no longer be ignored.

Another force that is hard to ignore is the magnetic Josh Homme of Queens of the Stone Age. Roaring onto the stage, Queens performed hits ("No One Knows"), oldies ("The Lost Art of Keeping a Secret") and the new ("In My Head").

A notable act from a front man was Paul Banks from Interpol eschewing his traditional black uniform for a pink polo while droning through ditties like "Slow Hands" and "PDA."

No strangers to the heat, Arizonan Jimmy Eat World opened their set with "Bleed American" and took us through "Pain" and "The Middle" before coming to "Sweetness."

One of the sweetest bits of the day was found on Stage Two. The Dead 60s, influenced by The Clash and ska masters like the Specials, exhibited drumsticks on guitar strings and cowbell beating with fun songs like "Riot Radio." The Mars Volta hypnotized with their avant-garde explosion of instrumentation. I left before their set finished knowing that a radio festival is definitely not the best way to experience them.

I also had to duck out during the evening’s last act, glam-metal legends Mötley Crüe. I managed to witness "Shout at the Devil," and that song, along with the intense heat and noise from their pyrotechnic effects, my exhaustion from the long day and dread of the parking lot zoo, were quite enough for me.