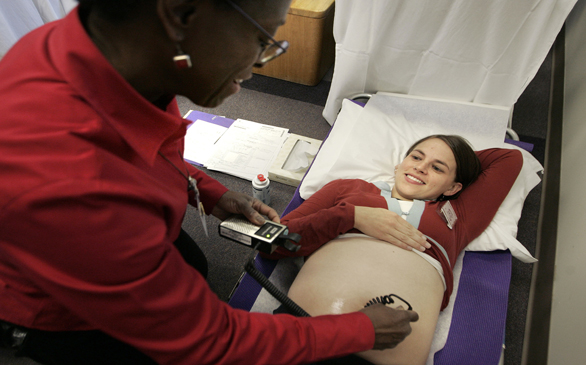 Osha Sakosky is combing through the posts on Craigslist, looking for a summer job. She has a list of criteria that must be met, no matter what. The job has to provide her with a flexible schedule so that she can attend the summer session at her junior college. A competitive salary is important, and if it’s got childcare, that’s an even bigger plus. You see, Sakosky is pregnant. The 19-year-old college student has recently downgraded from an expensive Southern Atlantic university to a local college in her old stomping grounds, the San Fernando Valley. While her parents have offered emotional support, Sakosky assumes most of the cost of raising her child and continuing her education alone.

“None of this was planned, so it’s been a little surprising and stressful,” she says, while sitting among the crowd at Coffee Bean & Tea Leaf.

Sakosky is like a growing number of young women across the United States who have found themselves pregnant while still in college. For many expectant mothers, the rigors of pregnancy can be taxing enough without adding the stress of academics to the process.

This hardship is something that many activists and organizations are desperately trying to change. Marina Aquino is a 40-something single mother who gave birth to her first child – a son – when she was just 17. Her youngest daughter recently announced to the family that she is pregnant, placing the two women at the same age when first entering motherhood. As a result, Aquino (a recently ordained minister) hopes to establish a charity that will act as a support system for teenagers and young women who are pregnant and attempting to finish college.

“To call these babies a mistake is wrong,” she explains. “If anybody called my son a mistake, I won’t be responsible for my actions. My daughter is just a baby herself. Do I wish she had waited? Of course! But I will be there to support her and the baby no matter what so she can get that degree. She needs to make something of herself.”

Expectant mothers attending college no longer have to discontinue their studies after discovering they are pregnant. Many professors will work with pregnant students, allowing some flexibility for OB/GYN appointments. Even if they don’t, there are a number of reputable online college and university programs that accept transfer credit and allow give and take when morning sickness, physical discomfort and hormonal fluctuations set in.

Some students like Sakosky may even opt-out of their four-year university program in exchange for classes at a local community college. Student Services can also be instrumental in providing important information about social programs that may lessen the financial burdens of giving birth and bringing up the baby.

Still, for women who find that they must put their education on the back burner indefinitely and earn a living to support their new family, there are plenty of opportunities there as well. Companies, like Lakeshore Learning Materials (lakeshorelearning.com) based locally in Carson, Calif., offer on-site childcare for many of its workers, removing the stress of finding adequate daytime supervision.

The important thing for college-age parents to realize is that they are no longer relegated to black and white decision-making (abortion vs. adoption). Keeping and parenting a baby can be a viable option as well, with some intelligent forethought and execution of plans.

In July, Sakosky will move in (full-time) with another student mother. The two will share rent for a two-bedroom apartment in Van Nuys as well as childcare responsibilities whenever they can.

“I’m having a girl and naming her Echo,” says Sakosky, adding, “Hopefully, she won’t come early because mommy’s still a mess.”

*As of press time, Sakosky found a job – working as her apartment complex’s assistant manager.