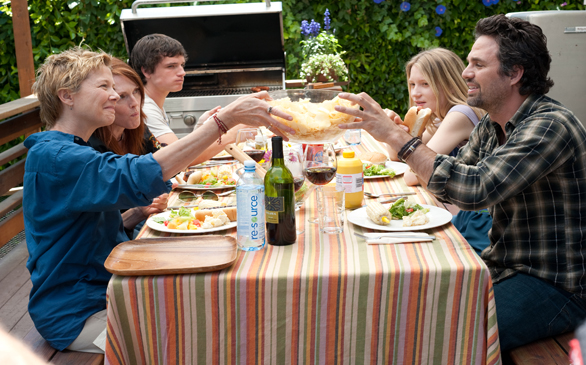 The Kids Are All Right kicks off the Los Angeles Film Festival.
(Credit: Suzanne Tenner )

For a city that claims to love film and harbor an environment specifically geared for filmmakers and artists, Los Angeles doesn’t make it very easy to unite the film community, which is why other, smaller cities that have less going for them (Have you ever been to Sundance when the festival isn’t in town? I hope you like a pretty landscape.), are more likely to host the big festivals and pass out the sought-after awards.

I was in Cannes just a few weeks ago when the festival was in full swing. I arrived in the town on the French Riviera with the expectation that Brigitte Bardot would be posing along the beach, that I would run into Quentin Tarantino at a screening, and that he would be that approachable. That’s the image that the Cannes Film Festival has been working under for the past 60-plus years.

The disillusionment and consequent realization is the hardest part. Cannes is a beautiful city on the Mediterranean, and the festival has discovered some of our biggest directors and actors today. But like any industry, the bottom line is the paycheck that must come on time. Cannes is just another business market, one that has to sell hundreds of films to make the year-end quota. Maybe the glamour and celebrity of little places like Cannes is all an illusion as well.

Los Angeles has to fight traffic and remain complacent with year-round shooting schedules, and it’s a city that refuses to be outshone by any festival, even its own. However, the Los Angeles Film Festival is fighting back. For the past 16 years, LAFF has been showcasing some of the best independent films being made, as well as premiering audience favorites like The Devil Wears Prada. Above all, the festival is geared to connect the average movie-loving citizen with filmmakers and industry professionals.

This year, the festival includes 200 feature-length and short films and music videos from over 40 countries. Presented by the Los Angeles Times and produced by Film Independent, the 2010 Los Angeles Film Festival runs from June 17 to June 27 in downtown Los Angeles.

Opening the fest is The Kids Are All Right. Starring Annette Bening, Julianne Moore and Mark Ruffalo, the film revolves around the consequences of artificial insemination on a family that has two mothers and whose teenaged children want to find their father, causing problems in the home. Steve Carell, Jason Segel, Russell Brand and Kristen Wiig close the festival with the world premiere of their new animated 3-D feature, Despicable Me, which focuses on the world’s greatest super villain stealing the moon.

Cyrus (June 18) is the highly anticipated film by the Duplass brothers and stars John C. Reilly, Jonah Hill and Marisa Tomei. A twisted romantic comedy among the Gala screenings, it centers on a lonely guy who meets his perfect woman who comes with baggage – her adult son. Another Gala screening, Waiting For “Superman” (June 21, 22), exposes the U.S. public education system, which has been failing our children who have no other options.

Orly (June 18, 21, 22) and Upstate (June 21, 24, 25) see their North American and World Premieres, respectively, at LAFF in the Narrative Competition. The former takes place at Paris’ Orly Airport, where lives intertwine at the bustling hub of transportation. The latter explores the upheaval of buried feelings between a woman and her now-married friend during a weekend away.

Bibliothèque Pascal (June 19, 21) is a Hungarian film about a woman who’s fighting for her child by creating a twisted fairy tale; the film is featured in the International Showcase for its North American Premiere. Finally, Bitter Feast (June 18, 20) is a film to keep an eye out for. James LeGros stars as fallen celebrity chef who kidnaps the food blogger he blames for his demise.

LA Weekly’s restaurant critic Jonathan Gold, legendary artist Quincy Jones and actor and writer Paul Reubens serve as this year’s Artists in Residence, with each introducing a film that has inspired their work. The Festival features unique signature programs including the Ford Amphitheatre Screenings and Poolside Chats.

Like any well-respected iceberg, this is just the tip of the festival that, for once, is in our backyard.