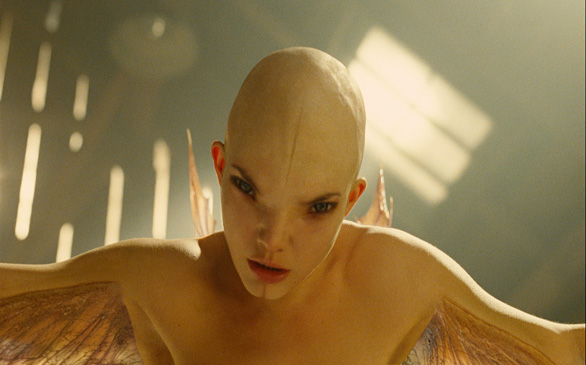 This film dares to go places that really get under your skin.
(Credit: Courtesy of Warner Bros. Pictures)

I don’t write reviews, because film reviews suck, but every now and then a film comes along that I have to talk about. It doesn’t happen often, but when I do see a film that kicks my ass, I feel an obligation to do my part to support the film. That film is Splice. It stars Adrien Brody and Sarah Polley and is directed by Vincenzo Natali.

But before I talk about this film, let me back up a few years to 1997 (OK, more than a few) and talk about another film from the same director. That year a little film called Cube slipped in under the radar. It had a small theatrical release, then casually made its way to DVD, and it wasn’t until either ’98 or ’99 that I finally saw it. Knowing virtually nothing about it, I rented it on a whim (You know, I just do crazy shit like that.) and boy, am I glad I did because it became one of my favorite films of all time.

I could tell you what the story of Cube is, but going in completely clean is the best way to experience that film. The less you know, the better, because the characters “enter” the story not having any clue as to what’s happening around them, so not knowing what the movie is about is, in a way, like going on the journey with them. If you haven’t seen that film, put down the supersized double bacon heart attack burger or the nonfat soymilk doubleshot chai latte or whatever unhealthy food product you’re probably holding and go obtain a copy of that film. Anyway, what the fuck was I talking about?

Oh, yeah! Splice. Basically, the reason I bring up Cube is because that film established an original filmmaking voice in Natali. His stories are smart, psychological, very well written and terrifying. It wasn’t until Splice came along that I would see another film written and directed by the man, and he blew me away all over again. Aside from really loving the film, I noticed that every aspect of Natali’s craft as a filmmaker had greatly improved since Cube.

The film is about two gene scientists who create designer drugs and medicines by splicing animal genes together. Without the permission of their superiors, they splice human DNA with the animal DNA and create “Dren” a … I wouldn’t know how to describe her. What I will say is it’s fucking awesome. Now I know what you’re thinking. You’re probably thinking, “I know what happens. They create this humanoid animal thing, it gets loose, goes around ripping people apart and either the creators have to kill it or some badass Michael Madsen character is brought in to hunt the thing down.”

You know why you’re thinking that? Because that’s how damn near every other sci-fi/horror film goes. And as you’ve probably realized by now, the reason I’m talking about this film is because it ain’t like that. Not one bit. This film doesn’t go to the normal places that all the other middle-of-the-road sci-fi films go. This film dares to go places that really get under your skin. This film reminded me of science-fiction films of the ’70s and ’80s when those types of film had a real edge to them. That was when films had to be special instead of being formulaic and predictable (sigh).

I have no doubt that this film is going to become a cult classic, however it’s really important that the public supports films like this. If you want better films to come out, then you have to support the good films that do manage to come out. If you haven’t seen Splice, put down the Xanax or Vicodin (actually, take that first), and go see this movie!