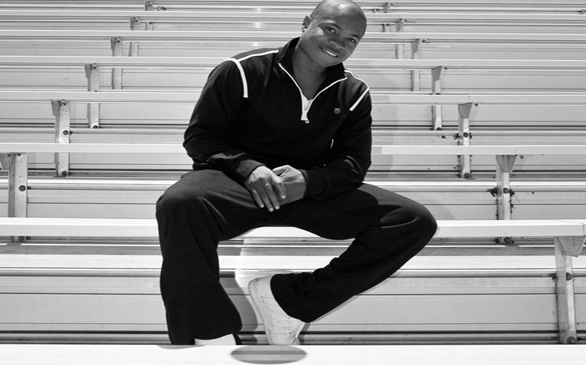 If given the chance, most guys wouldn’t be likely to pass up a chance to start over in college as one of the star football players. Sam Jones III is thoroughly enjoying living vicariously through his role as Craig Shilo on Spike TV’s “Blue Mountain State.” Craig is an incoming freshman football star at Blue Mountain State.

“Everything about Crag Shilo is my favorite part: the partying, the football, the girls,” says Jones.

Although he has only mainly worked on dramas before, Jones loves adjusting to the comedy world.

“Words can’t describe. It’s the most fun job that I’ve ever had in my life. The mood on this set is very different,” says Jones. “I actually thought comedy was going to be easier, but when we started the show, I found out how challenging comedy is because your timing has to be just right. It’s a really good experience.”

Although he grew up playing football for fun around his neighborhood, his passion didn’t carry over into his adulthood. However, the real college players in Montreal who perform the background and stunts for the show instilled an appreciation in Jones.

“Once I started the show, I became a fan of football, because I respect the sport,” he admits.

When he’s not on set, he’s also the CEO of his record label, Miracle Music. The label is in its first year and so far represents one artist, 18-year-old pop/R&B singer Joelle. Originally from Australia, Joelle has been in Los Angeles for less than two months. Jones came across a video of Joelle’s on Facebook and fell in love with her talent.

“She’s one of the most gifted singers I’ve heard in the past 10 years,” Jones boasts.

That very video is posted on his Web site, samjonesiii.com.

Miracle Music is focusing on developing Joelle and finishing her album. Because Jones wants to give Joelle his undivided attention, he has no immediate plans to take on other artists and has actually already had to turn away artists.

“I really want to finish her album and get that out there before we start taking other artists. When people see the success of her, our track record will speak for itself,” Jones explains. “Once we do that, we’ll open the doors to others.”

He must have taken good notes from Clark Kent on “Smallville,” because Sam Jones III is now acting as a real-life Superman to inner-city kids when he’s not at work. Jones attended an inner-city school when he was young, so now he’s giving back and acting as a mentor to children through the Mark Ricks Mentoring & Sports Program.

“It’s about mentoring the kids. I saw what was going on there and wanted to be a part of it. I went out one Saturday, and I’ve returned every Saturday since,” says Jones.

While he had volunteered to read at schools and visit hospitals before, he isn’t the biggest fan of having the cameras on him when he’s off set. With the other actors and cameramen around him, he feels it is only about the press.

Live-in girlfriend and former “Girl Next Door,” Karissa Shannon, actually convinced Jones to speak out about the program. According to Jones, she told him, “You’re helping the kids, but you can help the program more if you give it more exposure.”

Jones and Shannon have been dating for five months now and recently moved in together.

“It’s going good. It’s going really good. We hang out so much anyways. It just feels like a normal progression,” says Jones.

When he’s not shooting his TV show, laying down tracks for his label or cuddling with his hottie girlfriend, Jones spends time working on a new television script. The last script he wrote was optioned, but didn’t make it on air.

Determined to make this script work, Jones is writing a new drama.