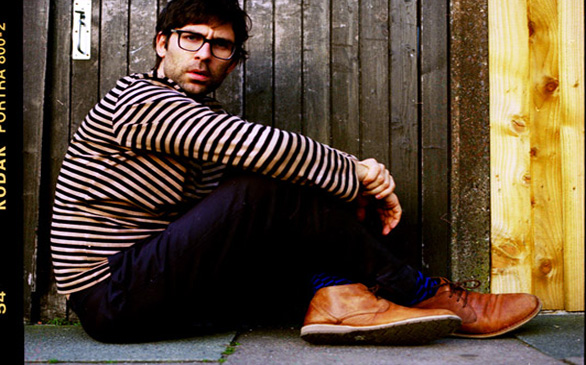 Jamie Lidell will make everyone dance June 19 at El Rey.

The summer concert season is upon us yet again, and rest assured readers, this column is one of precious few show guides that doesn’t make any puns about “cool” bands who are “turning up the heat” or “making it hot” or whatever. No, this is serious business. So unlike your usual weekly Frequency installments, there are accordingly no joke picks for shows here. And I assure you, it really took all my strength to abide by that and not include the Hanson/A Rocket to the Moon show. Believe it or not, there are actually enough awesome musicians touring this summer to fill up a whole page of text. Go figure, right?

Country music is admittedly not so much my forte, but this is a Kevin Lyman production, and the Great Lyman has yet to lead me astray with the Warped Tour, so I’m willing to hear him out with this. I mean, just looking at the artist lineup (Montgomery Gentry, Jamey Johnson, Ryan Bingham and the Dead Horses, etc.) it’s not that far off from what Warped looks and sounds like. I mean, a bunch of dudes strumming acoustic guitars, dressing up as cowboys in tight jeans while singing emo songs about girls who’ve done them wrong? At this point I’m surprised I haven’t started my own country band.

I’m not sure what it is about Imogen Heap’s tunes, either solo or from her days as a member of Frou Frou, but I’ve yet to hear a bad cover of her work. Despite the technical intricacy of her vocals, the songs themselves seem to bring out the best in anyone singing them, whether it be members of Boys Like Girls, Thrice or VersaEmerge. Now that I think about it, the punk rock boys do seem to love them some Imogen, oddly. Granted, I’m no exception to this myself, but it should go without saying that it takes a very skilled female, artsy singer-songwriter to pull in a fan base from the polar opposite end of the musical spectrum. Point being, see the original songstress that can make a bunch of rock ’n’ roll boys turn soft and emo; it’ll be worth your while.

If Jamie Lidell can make an uncoordinated and tone deaf white boy such as myself willing to sing and, dare I say it, dance in a public space upon hearing the jams from his latest album, he is a dangerous and skillful musician, and not to be crossed. Or he has gotten me very boozed up. I don’t think the latter is the case, so I can only assume the former to be true. But for any English-bred singer-songwriter who can combine indie rock and soul that masterfully, I wouldn’t rule anything out either.

I’m willing to go on the record and say that There for Tomorrow are criminally underappreciated as musicians. The Florida-bred foursome wrote one of the best melodic pop-punk albums of last year, with anthemic rock jams of a caliber far beyond their years, and yet they’re still the first-to-the-place opening support. Come on, y’all. These dudes should be playing their brand of epic rock in arenas, not 25-minute sets that start when it’s still light outside.

Say what you will about this year’s lineup. I mean, I know I certainly have. While it may not seem like it at first glance, this year’s lineup can hold its own against any past Warped roster. The only difference is that this year Kevin Lyman’s making you work a little bit. The truly worthwhile acts this year may not be the top-draw headliners, but if you do a little hunting, you’re going to find some amazing talent who are still undiscovered by the mainstream masses and who will very likely be some of your new favorite bands this time next year. Don’t worry, though, we’ll of course have a cheat sheet to give you a head start next week.

It’s still astounding how far this band has come and just how much they’ve blown up in a relatively short period of time. Be honest, who thought seven years ago that everyone and their mom would be drinking Followill-ade right now? I didn’t, and I even liked Youth and Young Manhood when it first came out. Well … maybe I just secretly hoped they wouldn’t because I didn’t want to share, but can you blame me?

Try as you might to pretend you’re too good for this, like “Electric Feel” was so last summer, you totally jam out to it still. Don’t lie, I know you do. It’s OK, I’m still stuck on it too, even though they have a new album out already. There’s no guilt, I promise.

This band can do absolutely no wrong by me. This is the show where sensitive artistry meets unrelenting aggression for entirely awesome effect. Every member of this band is a master practitioner of his respective instrument, although somehow nobody ever seems to acknowledge this in the press. I swear, any media outlet that does not include Thrice’s Teppei Teranishi on a list of best guitarists, in favor of having more nocturnal emissions over John Mayer or whatever, is automatically invalidated as a music authority. But be that as it may, even if all the rest of music media seems to be struck blind, deaf and dumb when it comes to recognizing this band, that doesn’t mean you have to be as well.

The Swell Season/She & Him/the Bird and the Bee

I think the only thing that all three of these acts really have in common is the gender ratio of their respective constituent members. But you know what? I’m not going to complain. Because all three acts are of the highest levels of awesomeness. So I guess that makes two things they all have in common.

There is no such thing as too much Jack White or Alison Mosshart in your life. White hasn’t met an instrument yet that he couldn’t own inside and out, while Mosshart wrote the textbook on being an epic effing frontwoman. This might be blasphemous to say, but White really is at his best when he’s at his darkest and grittiest.

I still want “Lovegame” to be the soundtrack playing in the background as I make grand entrances into rooms and do generally awesome feats of unmatchable badassery. Because Gaga transcends elitism and pretentiousness. Seriously, there’s no one you know who won’t be jealous you went to this show if you can get tickets. And no, for the record, I don’t get the “Alejandro” video either.

The dude is a punk rock legend. He’s an icon of rock ’n’ roll. He’s the epitome of being a badass. And he’s like, your dad’s age at that. You’re a bad person if you don’t see him at least once while he’s still kicking.

Not gonna’ lie, I’m just here for the Mötley Crüe. I don’t care who the other bands on the bill are – Ozzy had me at Nikki Sixx.

Even if you never really got into Something Corporate back when they first started out, there’s no reason you can’t become a new convert. Andrew McMahon is one of the most charismatic frontmen to ever take a stage, never giving anything less than his all while playing, whether owning giant arena stages or blowing the roof of tiny club venues. You don’t even have to know the lyrics to the songs, McMahon’s signature impassioned crooning makes you want to learn the words on the spot when you watch him perform.

Hey Phoenix, Grizz, I’m really happy for you, and I’ma let you finish, but you guys both put on one of the best shows … in small clubs. In. Small. Clubs. But, y’know, whatever. Not like I’ll turn down tickets to this show or anything. I’ll just update my Twitter in all-caps tweets from the back row of the Bowl.

I’m just going to say that when a band is genuinely talented and not a bunch of d-bags, their personal business shouldn’t matter. In the almost five years that I’ve been seeing the Tennessee pop-punk band live, never once have they given a bad performance, and even after becoming media darlings, they remain the same awesome kids they were when they first started. In a music industry where it seems egotism and bravado are prized above all else, that’s what should really matter.