April Sixth: Local Band gets a Shot at the Big Time – Again 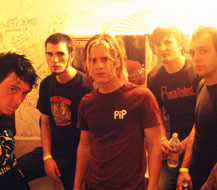 "We actually found the hotel but it was weird getting in. The entrance is through a neighborhood," says Robert Geiser, co-founding guitarist for Riverside rock band April Sixth. "It’s cool because we have a microwave and stove and refrigerator," he says of the Columbus, Ohio, tour lodging provided by the quintet’s new international label, Columbia Records.

Your typical family wouldn’t be so excited about transporting groceries back to a rented room for a taste of home cooking, but to a traveling band that waited years for the big-time label deal to kick start success, it’s just one fantasy in a dream come true – a chance to tour and eat well in promotion of their new album, In Memory. Does it get any better than that?

Co-founder and vocalist Christopher Wade hopes so. He knows that pot of gold is only a rainbow away, and that it’s just a matter of time before their first single, "Dear Angel," clicks with their fans, whirling them into demand at venues worldwide.

"This is the third major label we’ve been on so far with the same record; it’s been kind of a long process," says Wade. "We were on Elektra and the company got bought out by Atlantic Records. They said, ‘We don’t have enough space or workers to keep all the Elektra artists,’ so we started doing showcases for different record labels."

The whole ordeal was a show of perseverance and patience, considering there had been so much buildup after their initial discovery in 2003 by Dan Estrin, guitarist for Hoobastank, who passed April Sixth’s demo to Elektra executive and producer Howard Benson. It wasn’t long before they had a polished production, but were then forced to shop another deal.

Geiser says the studio experience with Benson was rewarding despite the record freeze. "He would come in with an amazing set of ears. He would make sure everything was OK at the end of the day."

Geiser has a blast making music in a two-guitar band with fellow axeman and co-founder Brian Marquez. Their chemistry doubles the power of their high-energy live show.

"It’s like two heads are better than one. One of the guitarists can play the rhythm section and it allows the other to move around more," says Geiser. "It’s like having 10 fingers to rip on the guitar."

The more frenzy an April Sixth show creates, the more Wade is incited to please. He loves performing the tempered "Living a Lie," finding the energy release infectious.

"I can barely hear myself think, the kids are screaming so loud. Everyone is clapping, crowd surfing, and everyone’s going crazy," says Wade.

In fact, he often gets swept into the midst of the insanity to a breaking point. "I think I have a fractured rib from crowd surfing and face diving. I was trying to get back on stage, and I slipped and crushed my ribs on a barricade."

Wade loves feeling high when entertaining raucous crowds but prefers dark moods and solitude when creating new material. "It helps me overcome my depression. I want other people to know that I’m going through the same things," Wade admits.

He and Geiser both relish performing hard rock songs but support the sudsy "Dear Angel" to introduce April Sixth. "Ballads appease more people, which is OK for me. I wrote it when I was 17; it was a letter that I was writing to one of my ex-girlfriends. Kids are getting a good feeling from that song."