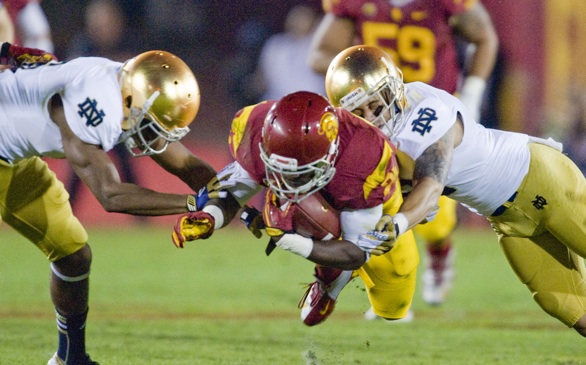 The Lakers celebrate their 83-79 win over the Boston in Game 7 of the NBA Finals.
(Credit: Robert Gauthier/Los Angeles Times/MCT)

The ball skidded off the rim and fell into the waiting hands of Pau Gasol, who flipped it to Lamar Odom, who chucked it the length of the court.

Kobe Bryant chased after it with both hands upraised in a mixture of triumph and relief. He caught up to it underneath the basket as the final buzzer sounded and purple-and-gold streamers and confetti tumbled from the Staples Center rafters.

Randy Newman’s civic anthem, “I Love L.A.,” thundered over the sound system as Bryant tucked the ball under his arm and raced to join his celebrating teammates. Bryant jumped atop the scorer’s table and thrust his arms toward the heavens.

The Lakers were champions again, having rallied for a gritty 83-79 victory over the Boston Celtics in a winner-take-all Game 7 of the NBA Finals on Thursday night.

It wasn’t the prettiest game the Lakers played while defending their title. It was unquestionably their most resilient performance of 2009-10. They had no choice but to play it that way after falling behind, 3-2, in the best-of-seven series. They forced Game 7 with a 22-point victory in Game 6 on Tuesday at Staples.

In Game 7, the Lakers beat the Celtics with brains and brawn and patience. The Lakers trailed Boston by as many as 13 points in the early minutes of the third quarter, absorbing all the punishment that the physical Celtics could dish out.

The Lakers pushed back harder and won their 16th NBA title, one fewer than the Celtics’ league record. It was their second straight title in their third consecutive trip to the Finals. They beat the Orlando Magic last season after losing to the Celtics in 2008.

“Well, it’s done,” Lakers coach Phil Jackson said after winning his 11th title. “It wasn’t well done, but it was done. And we did it with perseverance.”

Bryant scored a team-leading 23 points on 6-for-24 shooting and also grabbed 15 rebounds, earning his second consecutive Bill Russell Award as the Finals MVP. Bryant had plenty of help from his teammates in the decisive game Thursday.

“A lot of people have been asking me ‘Ron, when are you going to step up, score 20, do this, do that,”‘ Artest said. “I’m like ‘What did we do as a team? It doesn’t matter what I did.’ Tonight was one of those nights where I had 20 points, but we still did that together.” Gasol added 19 points and a team-best 18 rebounds. Derek Fisher scored 10 points, and Odom scored seven points and grabbed seven rebounds.

The Lakers outrebounded the Celtics, 53-40.

“I just wanted it so, so bad,” Bryant said. “On top of that I was on [empty]. Man, I was really, really tired. The more I tried to push, the more it kept getting away from me. I was just glad my teammates really got us back in the game.”

Bryant swished two free throws to give the Lakers the lead for good, 66-64, with five minutes, 56 seconds remaining. He rebounded Ray Allen’s miss at the other end, then swished a fadeaway jump shot to make it 68-64.

At last, the Lakers had some momentum and rhythm.

Paul Pierce missed a 3-point try from the left wing and Bryant gobbled up the rebound. Gasol sank two free throws on the Lakers’ next possession, after Kevin Garnett fouled him, making it 70-64 and turning Staples Center electric with 4:38 remaining.

The Celtics could not catch the Lakers down the stretch.

Pierce scored 18 points and grabbed 10 rebounds, Garnett scored 17 points and Rasheed Wallace had 11 points and eight rebounds in place of injured center Kendrick Perkins, who tore two ligaments in his right knee in Game 6 on Tuesday.

In the closing moments, a varied cast of characters took over for the Lakers. Artest swished a 3-pointer from the right wing to make it 79-73. Gasol snared an offensive rebound off Bryant’s missed 3, returning the ball to Bryant, who charged into the paint and drew the sixth and final foul on Wallace with 25.7 seconds left. Bryant made both free throws to make it 81-76.

Later, Sasha Vujacic stepped to the free-throw line and swished two to make it 83-79 with 11.7 seconds remaining. It was a sweet moment for Vujacic, who was so upset by the Lakers’ loss to the Celtics two years ago that he stopped wearing green.

“We all knew it was going to be a tough game,” Gasol said. “We knew we had to do what it took out there and leave it all out there, just play with our hearts. ... We fought extremely hard. We kept our minds and our hearts into the game at all times.”

Lakers fans were on their feet for most of the second half, doing all they could to urge the team, in general, and Bryant, in particular, to victory. Many in the sellout of 18,997 chanted, “Ko-be, Ko-be” during a timeout with nine minutes remaining.

When it mattered most, Bryant relied on his teammates to win. After days and nights of downplaying the significance of defeating the Celtics, he smiled at game’s end and said, “I was just lying to you guys. ... It meant the world to me.”