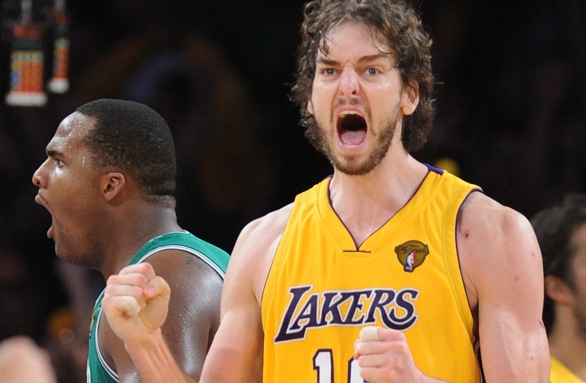 Pau Gasol pumps his fists after hitting a basket during the fourth quarter of Game 7.
(Credit: Wally Skalij/Los Angeles Times/MCT)

The stoic guy with the shaggy hair screamed, and a city screamed with him. The tough guy with the constant glare wept, and a city danced in his tears. The stern superstar skipped across the court like a child, and a city is still bouncing along in his wake.

Struggling through one of their worst starts of the season, the Lakers finished with one of their greatest moments ever, climbing back from a 13-point deficit to defeat the Boston Celtics, 83-79, to win Game 7 of the NBA Finals and clinch their second consecutive championship.

This is 16 franchise titles, perhaps none of them more difficult. This is five rings for Kobe Bryant and Derek Fisher, absolutely none of them as hard. This is redemption for the Celtics’ 2008 Finals beating, and can anything be so sweaty yet so sweet?

This was a Celtics team tugging and twisting and clawing at the Lakers’ crown for nearly three hours. This was the Lakers, finally, resolutely, refusing to give it up.

This was the Celtics leading by double digits midway through the third period, leading by four points at the start of the fourth quarter, leading by three with 6:29 remaining in the game and the season.

This was towel-waving, balloon-busting fans pleading, “Ko-be, Ko-be.” This was beard-dripping, jaw-popping Fisher scolding and urging. This was, finally, the Lakers finally answering a championship challenge as Lakers have done for decades.

“I want to thank my psychiatrist,” Artest said later.

It was a perfect footnote to a perfectly nutty year that ended with Artest absolving Lakers management of all guilt for signing him instead of Trevor Ariza, the mad man winning his first ring by scoring 20 points with five rebounds and five steals and acting like the only Laker who didn’t feel the heat.

I guess having no idea where you are or whom you are playing really does help sometimes, huh? Afterward, he brought eight family members with him to the front of the interview room, raised his arms and shouted, “Acknowledge me, acknowledge me!”

The other star was Gasol, who took a huge step toward eventually taking over the leadership of this team from Bryant with 19 points, 18 rebounds and the kind of emotion that several other frazzled Lakers lacked.

Soft? Not him. Reticent? No more. Screaming? Like a banshee, he did.

“We fought extremely hard,” says Gasol. “We kept our minds and our hearts into the game at all time, and we hustled ... we hustled.”

The Finals MVP was Bryant, even though he made just six of 24 shots and had twice as many turnovers (four) as assists (two). For most of the game, he was simply terrible. But in the end, scoring 10 points in the fourth quarter, grabbing the final long pass from Lamar Odom as the buzzer sounded, posing on the scorer’s table while being showered with cheers and confetti, he was simply old Kobe.

“I just wanted it so bad ... and the more I tried to push, the more it kept getting away from me,” Bryant says. “I was thankful that I was able to make one damn shot at the end of the game.”

He was thankful, he was cheerful and, finally, he was completely honest when he was asked about the individual thrill of winning a fifth ring.

“Just got one more than Shaq,” he says.

And here, we always thought it was about winning six rings to catch Michael Jordan. This victory means Bryant will probably have a chance to catch Jordan, if not pass him, as this team will stay intact at least for another year.

This team begins with Coach Phil Jackson, and the guess here is that man with a record 11 championship rings is coming back next year, especially after seeing him hobble across a crowded court afterward to hug girlfriend and Lakers official Jeanie Buss.

“It does improve my chances,” Jackson says of the victory.

Fisher, whose contract also expires, also has to return, right? Especially after that speech he gave his team at the start of the fourth quarter?

Thus began a bruised crawl to victory, a grand march into forever.