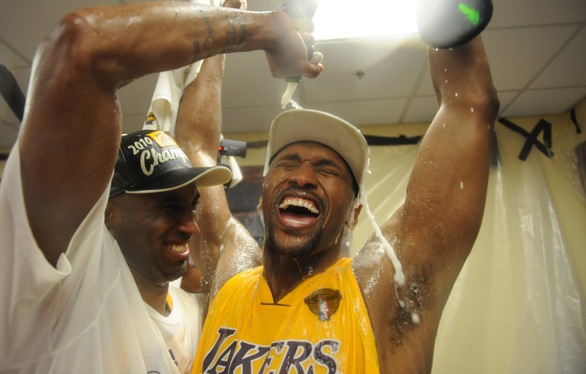 It started nine months ago on a quiet day in El Segundo, aspirations of a 16th NBA championship a distant, faraway possibility, but it ended with finality for the Los Angeles Lakers, in a victory against their hated rivals amid a blizzard of purple-and-gold confetti.

It wasn’t pretty, the teams enmeshed in a slow-speed chase to be the first to 80 points, but redemption arrived for the Lakers, an entire arena, 13 players and a 64-year-old coach who exhaled as one after the Lakers fended off the Boston Celtics, 83-79, Thursday in Game 7 of the NBA Finals.

There will be a victory parade Monday, snaking its way through the heart of a city that was broken two years ago by the Celtics but invigorated Thursday at Staples Center.

Kobe Bryant had 23 points on a rough shooting night, but the only number he cared about was his fifth championship ring, tying Lakers luminary Magic Johnson and moving within one of Michael Jordan.

“This one’s by far the sweetest,” Bryant said in front of a still-standing Staples Center crowd that, on this night, had no desire to leave early and beat traffic.

His reasoning was simple. He and his teammates overcame so many injuries and, at times, ineffectiveness to make this championship anything but tops on his list. Not to mention that it came against the Celtics.

When it was over, after the Lakers had clinched their second consecutive championship, Bryant jumped into the arms of Ron Artest, who carried the team in the first half, and was quickly joined by Sasha Vujacic and Lamar Odom on the court.

And yes, the distinct smell of cigar smoke could be detected from the courtside seats as Lakers girls embraced one another, and Coach Phil Jackson came over for a moment with his longtime companion, Lakers executive Jeanie Buss.

The first voice to stand out among the bedlam was that of public-address announcer Lawrence Tanter, who leaned into his microphone and said in his stentorian way, “No.16,” appropriately enough.

Jackson made it a point to embrace 14-year veteran Derek Fisher, who made a stand in the playoffs after a subpar regular season. Pau Gasol wept openly, finishing with 19 points and 18 rebounds, shedding whatever tatters of the “soft” label remained.

Bryant, with one of his daughters on his shoulders, accepted congratulations from Celtics legend Bill Russell. Then he received a hug from team owner Jerry Buss.

Despite his off night, which included six-for-24 shooting but an impressive 15 rebounds, Bryant was selected the Finals MVP for the second consecutive season. He averaged 28.6 points, eight rebounds and 3.9 assists in the series.

Then he made a case for Jackson to return for one more season, a decision to be made before the amateur draft next Thursday.

“He knows how bad I want him to come back,” Bryant says. “Let’s go for it again.”

Through three quarters, it looked like the Lakers might be going back to a hushed, demoralized locker room. Bryant made only five of 20 shots as the Lakers trailed going into the fourth quarter, 57-53.

Lakers fans wanted their protagonist to break free, so much so that they conjured up a “Kobe, Kobe” chant during a timeout with nine minutes to play.

After his 17-footer gave the Lakers a 68-64 lead with 5:22 left, Bryant’s teammates encouraged him, trying to fire him up. It was the only shot he made in the quarter, but he delivered from the free-throw line, making eight of nine in the final 8:46.

“I wanted it so, so bad,” Bryant says. “The more I tried to push, the more it kept getting away from me. I’m just glad that my teammates really got us back in the game.”

Gasol would be one of them, as would Artest, who scored 20 points and collected five rebounds. He made a key three-pointer with 1:01 to play, giving the Lakers a 79-73 edge in a game where every point truly mattered.

And how does a team win a championship while shooting 32.5 percent in Game 7, making only 27 of 83 shots?

By rebounding and playing defense, two of Jackson’s favorite words when assessing who usually wins a game.

The Lakers outrebounded the Celtics, 53-40, including a staggering 23-8 advantage on the offensive boards. They also managed to hold the Celtics to 40.8 percent shooting, Ray Allen making only three of 14 and Paul Pierce five of 15.

“It’s very sweet,” Gasol says. “It definitely adds up when you beat Boston, especially the rivalry, the history of the franchise.”

It added up, indeed. The Lakers’ season was more than complete on a journey that finally came to an end.