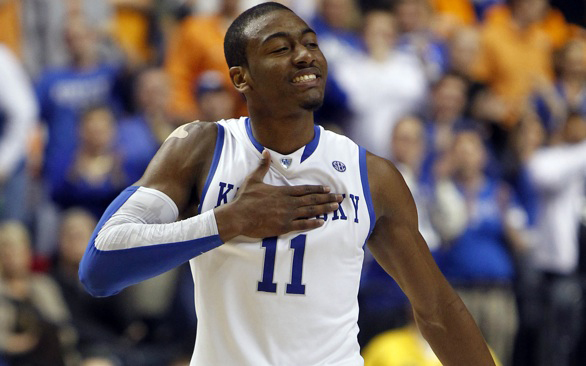 The Wizards should select Kentucky’s John Wall as the No. 1 pick.
(Credit: Mark Cornelison/Lexington Herald-Leader/MCT)

This summer is going to be one of the busiest in basketball, not only because of the free agency period, but also for the 2010 NBA Draft. Several talented young players are available for grabs for the teams looking to draft, especially in the first round.

Although it did not end up with the squad with the worst season record, the overall No. 1 pick belongs to the Washington Wizards. The Philadelphia 76ers, New Jersey Nets, Minnesota Timberwolves and Sacramento Kings round out the top five. The Golden State Warriors, Detroit Pistons, Los Angeles Clippers, Utah Jazz and Indiana Pacers follow them, respectively.

Both the Timberwolves and Memphis Grizzlies have three selections each in the first round, while the Wizards, Nets and Oklahoma City Thunder have two. From these five groups, the Wizards, Nets and Thunder have the opportunity to put their organizations on a positive, yet progressive, path. This trio has an array of talent already, but choosing the correct picks in this season’s draft could be integral to their immediate success in the league (for the Thunder, a continuing success).

No. 1: The obvious selection for the Wizards is Kentucky point guard John Wall. This individual is ready for the NBA, and he will be a franchise player alongside Gilbert Arenas. Having both of them in a starting lineup could result in rapid success. Wall managed nearly 17 points per game, while dishing out 6.5 assists per affair as a freshman.

No. 2: Ohio State’s Evan Turner is the next best talented player left on the board, so the 76ers must make this selection. Turner has a potent body, and he could easily be a true scorer during his first campaign professional campaign. Turner averaged 20 points and nine rebounds per game in his junior year.

No. 3: The Nets need a big body and Georgia Tech’s Derrick Favors could fill that need. He is strong and physical, and he is capable of scoring and being an efficient rebounder. Favors produced efficient numbers (12 ppg, 8.4 rebounds) in his first collegiate year.

No. 4: Syracuse’s Wes Johnson fits this spot for the Timberwolves. Johnson pitched in 16.5 points and 8.5 rebounds per game last season.

No. 5: The Kings have skilled players, but they still lack a true center in their rotation. Georgetown’s Greg Monroe is a perfect fit. Monroe can contribute a double-double in time.

No. 6: A power forward is what the Warriors need to select here. Even though he was a center often with Kentucky, DeMarcus Cousins could best fill this team’s needs. Cousins is big, athletic, a scorer in the post and can play a significant role defensively. Cousins is another player who can chip in a double-double often.

No. 7: The Pistons need someone large as well, so look for them to draft Baylor’s Ekpe Udoh if still available. Again, Udoh is another person who can produce double-doubles each game.

No. 8: What can go wrong with this selection? Well, ask the Clippers. Los Angeles has a young nucleus, two solid veterans in Baron Davis and Chris Kaman, and the upcoming development of potential superstar Blake Griffin. However, something tends to go wrong yearly for this organization. Who knows what pick they will make, but Nevada small forward Luke Babbitt is an obvious option. Babbitt is a scorer; he averaged nearly 22 points.

No. 9: Utah was one lucky team that received a pick in this draft’s top 10 (from New York via Phoenix). Butler forward Gordon Hayward could probably be chosen. Hayward can be a 20-point, 10-rebound producer someday.

No. 10: The Pacers are another team in need of a big body, so North Carolina’s Ed Davis fits well. Davis averaged 13.4 points, 9.6 rebounds and 2.8 blocks per game.

No. 11: Fresno State’s Paul George to the New Orleans Hornets.

No. 12: Kansas’ Xavier Henry to the Grizzlies.

No. 13: Kansas’ Cole Aldrich to the Toronto Raptors.

No. 14: Wake Forest’s Al-Farouq Aminu to the Houston Rockets.

No. 15: France’s Kevin Seraphin to the Milwaukee Bucks.

No. 16: Kentucky’s Patrick Patterson to the Timberwolves.

No. 17: VCU’s Larry Sanders to the Chicago Bulls.

No. 18: Iowa State’s Craig Brackins to the Miami Heat.

No. 19: Oklahoma State’s James Anderson to the Boston Celtics.

No. 20: Texas’ Damion James to the San Antonio Spurs.

No. 21: Marshall’s Hassan Whiteside to the Thunder.

No. 22: Connecticut’s Stanley Robinson to the Portland Trail Blazers.

No. 23: Texas’ Avery Bradley to the Timberwolves.

No. 24: Mississippi’s Terrico White to the Atlanta Hawks.

No. 25: Nevada’s Armon Johnson to the Grizzlies.

No. 26: Florida State’s Solomon Alabi to the Thunder.

No. 27: Kentucky’s Eric Bledsoe to the Nets.

No. 28: Oklahoma’s Tiny Gallon to the Grizzlies.

No. 29: Xavier’s Jordan Crawford to the Orlando Magic.

No. 30: Kentucky’s Daniel Orton to the Wizards.