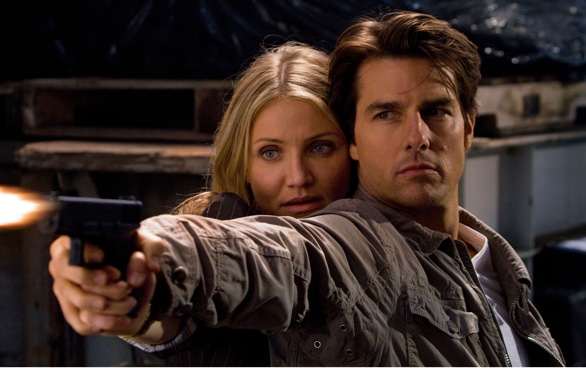 His career may have come off life support thanks to a hilariously vulgar turn as Len Grossman, but in Knight and Day Tom Cruise reminds audiences exactly why he was one of the biggest movie stars in the world from the moment he slid across a living room floor in his Ray-Bans and tighty whities until he jumped the couch. The guy is just undeniably charismatic and wonderfully watchable, a fact many audiences forgot when the actor imploded in 2005 but can be reminded of when Knight and Day opens this week.

Returning to the big screen as Roy Miller, a role with major shades of Ethan Hunt after he’s been Bourne-ified, the slightly off-his-nut actor plays a potentially off-his-nut secret agent who not so accidentally bumps into bubbly civilian June Havens (the always-adorable Cameron Diaz) at the Wichita airport. When the pair ends up on the same plane, as the rom-com gods would have it, they can’t help but share their secret hopes and dreams for the future. But this isn’t Jerry Maguire; the adorability stops there.

When June heads to the bathroom to freshen up and give herself a pep talk about picking up a total stranger, the plane’s other passengers – also trained federal agent assassins – turn on Roy, giving him a chance to school audiences on things like how to use your seatbelt as nunchucks. By the time June’s emerged from the lavatory, everyone onboard is dead, and Roy is piloting the plane into a cornfield, taking out an innocent scarecrow in the process. Setting the tone for the rest of the film, the sequence is ridiculous, overblown and frantically paced, but also incredibly enjoyable.

Formerly paired in 2001’s Vanilla Sky, Diaz and Cruise have a lively chemistry that brings sparkle to writer Patrick O’Neill’s occasionally derivative screenplay as the film moves from one glorious panorama to another (Seville, Spain, Salzburg, Austria and Port Antonio, Jamaica, are among the finery), but one of the film’s greatest assets is director James Mangold. Despite the fact that Mangold didn’t steer Peter Sarsgaard away from the appallingly amateur accent he attempts as a federal agent on Roy’s heels, the director’s visual dexterity and ability to cultivate layered performances where clichés are so readily available, as he did in 3:10 to Yuma and Walk the Line, makes Knight and Day more than a mindless action romp.

With genuine moments of hilarity and marvelous Easter eggs for the audience to unearth along the way, Knight and Day may be formulaic, but it succeeds because of the talent at the helm, most notably, Cruise. This might be what a career resurrection looks like. Valkyrie, who?