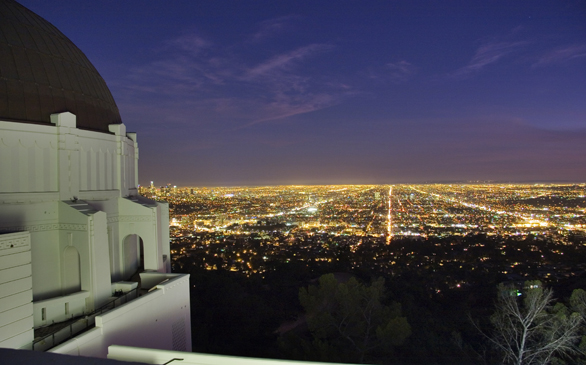 “Summer days driftin’ away, to uh-oh those summer nights” was what those Grease kids sang, and while the connotation can mean whatever you want it to mean, there’s no denying the feeling of randomly exploring the city after the world’s fallen asleep. Hot days give in to cool nights during the summer, where beach sunsets signal the twinkle of the L.A. skyline. Outside, it only takes an arm around your shoulders to cover the chill or a swig of liquor to make everything feel just right for the walk outside. It’s at night where the real glamour of Los Angeles shines, and I’m not talking about the Botox pretentiousness you see in the daytime.

It’s in watching downtown Los Angeles light up like its own movie premiere on top of Runyon Canyon or Griffith Park, the sunsets, moonlights or if you’re willing, the sunrise.

Though the gates were closed, I drove with a couple of friends to a hill leading up to Griffith Park. There was an element of danger in our adventure, where surrounded by total darkness and dirt roads, what we knew of what a “city” was became something totally arbitrary. With just us three standing on a patch of dirt and dried plants, we stared down in the distance where the traffic lights flickered its red and greens.

You can hear yourself breathe in the orbs of light and color and the movement of car beams on the freeway. In Los Angeles, the higher you are, the better your view. Nighttime is best seen from above, and for those who would rather not stand alone in the dark, there’s always the Griffith Observatory, which offers the same views but in a more public setting.

As I recently found out, admission to the observatory building and its grounds is free all summer long. The location is prime real estate for a summer romance. Imagine watching Fourth of July fireworks in the sky at that height! The observatory is open Independence Day and daily (except Mondays) until 10 p.m. Free public telescopes also provide a clear view of the mighty Hollywood sign, with its big white letters standing guard over the city.

On the subject of romantic getaways, there was a sort-of twilight date I went on that turned out to be sheer bliss. It was Santa Monica Beach. Not the pier, but the empty lifeguard towers lined up throughout the shore. Just take off your shoes, climb inside to the top and watch the ocean waves together. The light from the pier and from the city streets meshes perfectly with the sound of the water. I’m seriously talking about the perfect romantic setting here (So romantic in fact that one couple was having a bow-chica-wow-wow moment on the sand not too far away. Do not let that be part of your lifeguard tower view, please!). But with all joking aside, the best part was that the festival lighting from the pier lent itself to the same feeling of watching the L.A. city skyline. The Ferris wheel turning like fireworks in slow motion with the blaring lights from the adjoining rides and shops gently reflected onto the surrounding water below. I was totally in love with the experience.

What about within the city?

There is, of course, the array of bars, restaurants and nightclubs, but these are places where you have to “try.” And when I mean “try” for a girl, it means having to get dolled up to impress not only your friends but potential dance partners. You have to find parking, pay covers, buy drinks … it’s all very technical. I’m not saying that those nights aren’t fun, but the night adventures I’m talking about are those restless evenings, where it’s too hot in the house and you want to go out without the need to impress anyone. Simply, it’s all casual.

Where after midnight, you can grab an In-N-Out burger before it closes at 2 a.m., go to a 24-hour Korean barbecue joint in Koreatown or go to a late-night diner like the famous celebrity-inhabited Mel’s Diner (8585 W. Sunset Blvd.; melsdrive-in.com). The drive along Sunset Boulevard is liberating without the traffic. If you have the time, stop by LACMA’s famous “Urban Light” sculpture for a photo-op with 202 cast iron street lamps (5905 Wilshire Blvd.; lacma.org). Talk about being in the middle of it all.