Adam Cagley: From Disney and Nickelodeon to MTV and LAFF 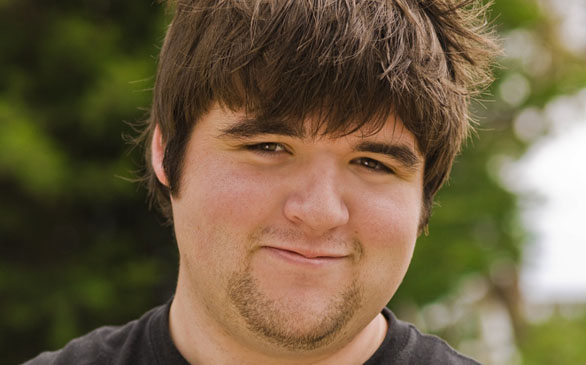 The transition between Disney Channel and MTV is like watching wholesome tween stars start to find their inner slut. Suddenly characters are allowed to be a little less politically correct and a lot more dirty, which equals more fun for an actor that has played alongside Hannah Montana before his new acting gig in MTV’s “The Hard Times of RJ Berger.”

In MTV’s attempt to try to be cool again, “Hard Times” centers on a social outcast with the blessing (or a curse) of a large penis. It has been deemed to be the melting pot of “The Wonder Years” and Superbad with the main ingredient taken from the same plot premise as HBO’s “Hung.” One character even mutters, “Any time, any place, any orifice,” which would make every clean and wholesome Disney Channel/Nickelodeon show fall flat into anaphylactic convulsions.

That is why Adam Cagley is stoked to enter MTV’s world of raw, uninhibited teenage anger and sexual frustration, graduating from shows like “All That,” “Ned’s De-classified,” “The Suite Life of Zack and Cody,” “Hannah Montana” and most recently “Good Luck Charlie.”

“I went from doing four-camera sitcoms where it’s all laugh tracks and comedy jokes to doing a whole show where I ride a scooter because I’m too lazy to walk. In one episode I talk about having all the sex I want. I mean it’s actually an easy transition because I really like that dirty, raunchy type of humor,” says Cagley.

“If RJ is the likable nerd, I would be the absolutely unlikable nerd because my character is just a horrible human being,” says Cagley, who exhibits an air totally opposite from the high school alter egos he plays.

Despite an easygoing exterior, Cagley’s preparation to become Stern on “Hard Times” depends all on method acting, a technique where actors recreate the emotions of the character in their head.

“Kevin Stern is this big ball of furious rage. Before we’d shoot scenes, I would set aside a few minutes to annoy myself as much as possible until I’m frustrated and angry.”

And for riding a scooter the whole time on set: “I could now do doughnuts on those things,” says Cagley

Unlike most Hollywood actors that are in their mid-20s playing awkward teenagers (ah hem … entire “Glee” cast), Adam Cagley is only 19, but for the past 10 years since being spotted at a dinner theater by his first agent, Cagley has played a cornucopia of high school’s lower life forms including nerds, bullies and dumb jocks in popular Nickelodeon and Disney Channel television shows.

One recent episode of Disney Channel’s “Good Luck Charlie” has Cagley merely walking in a room with a jean jacket and grim look on his face. Terrified, the main character is more than willing to do this bully’s homework.

In fact, there is a complete lack of arrogance about Cagley, who has a personality that’s altogether laid-back and is always ready for a good laugh and conversation. Outside of acting, he plays in an indie-acoustic band fused with reggae and “nerd-influenced” lyrics called Wallace and the Pilgrims.

However, it’s Cagley’s “look” that makes him the ideal type to play the antagonistic high school stereotype, with a menacing smirk and round face like Pugsley from “The Addams Family.” Cagley also has an uncanny resemblance to a younger version of actor and rock legend Meat Loaf. Apparently, when you compare a picture of Meat Loaf as a teenager with Adam, you get an exact match.

According to Cagley, this was one of the main reasons he was able to play Meat Loaf’s son in a nationally televised AT&T commercial.

For now, Cagley is enjoying his transition to MTV. He’s able to let loose and be humorous in a totally different way. And while similar departures from Disney Channel include Miley Cyrus’ last season of “Hannah Montana,” sometimes it’s just more fun to leave the world of rated PG to the home of “Jersey Shore.”

Adam Cagley appears in The Wheeler Boys at the Los Angeles Film Festival June 25 and June 27. “The Hard Times of RJ Berger” airs Mondays at 10 p.m. on MTV.