"Entourage": Set your DVR: The bromance is back. 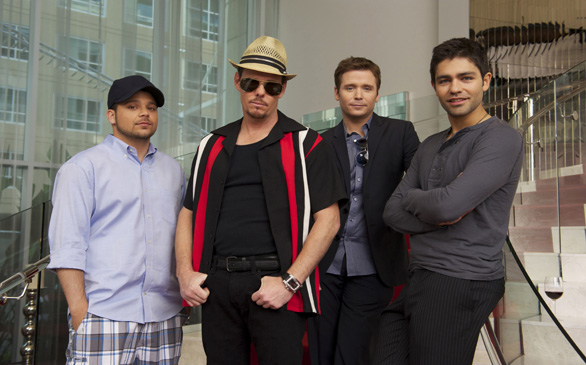 When Mark Wahlberg first dropped his show “Entourage” into HBO’s lap, everybody thought it would be the male version of “Sex and the City.” Little did they realize it would become so much more. “Entourage” has shaped a generation of Tinseltown wannabes, given birth to the “bromance” and produced such winning additions to the cultural lexicon as the now famous, “Let’s hug it out, bitch!”

It has also made stars of its largely unknown cast: Adrian Grenier (Vince) went from indie-film mainstay to Hollywood A-lister; Kevin Connolly (Eric) has become a sought-after talent in romantic classics such as He’s Just Not that Into You and The Notebook; Jeremy Piven (Ari) graduated from perpetual character actor to Emmy Award-winning showstopper; Kevin Dillon (Drama) became everybody’s favorite older brother and Jerry Ferrara (Turtle) will forever be the loyal buddy we all wish we could have.

As the show enters its final full season, followed by a recently announced feature film, the end of an era is dawning. But don’t cry for “Entourage” yet, because the fun is just beginning. Here’s a recap of everything you’ve missed and all the fun you can expect as the seventh season of Hollywood’s guiltiest pleasure gets underway.

At the beginning of season six, Vince finally got his career back on track. Marty Scorsese threw dawg a bone and cast him in the fictitious blockbuster, Gatsby. Vinnie Chase was back on top – figuratively and literally. Grenier fans all over the world got more than an eyeful as “Entourage” producers placed him in sex scene after sex scene after sex scene (Thank you, guys. Anything I can do to return the favor, just let me know.). But for all the career success and accolades coming Vince’s way, there would be serious ups and downs for his crew.

Turtle’s love affair with Jamie-Lynn Sigler was going strong. Under her tutelage, he cleaned up his act, got a preppy makeover and went back to school (Go Bruins!). There, he attracted the attention of a sexy coed. Turtle – the dude who used to scam on Vince’s sloppy seconds – finally got game! This did NOT sit well with Turtle’s lady. When Jamie-Lynn was cast on a show shooting in New Zealand, she cut Turtle loose, leaving him free to hook up with his classmate. But he still had his lady on his mind. Sadly, it doesn’t look like the feelings are mutual. Jamie-Lynn declined the chance to reunite with him.

Drama, Vince’s hothead older brother, finally got a much-needed career resurrection when he was cast on a hit series. Things were going great until he pissed off a studio exec looking to make a pass at Jamie-Lynn during her guest spot on his show. After some wild wrangling, he bounced back with a lucrative holding deal on the table from a rival network.

E’s relationship with Sloan (Emmanuelle Chriqui) hit that nauseating post-breakup plateau called, “Let’s be friends.” They gave it a good try, but the past AND present kept getting in the way, particularly Eric’s new girlfriend, Ashley (Alexis Dziena). Some called Ashley psycho; others called her “justified.” Pretty soon, E stopped calling her altogether. He got back with Sloan and proposed. She said yes.

Then, there’s Ari. After rescuing his homeboy, Andrew (Gary Cole), from the doldrums of a valley-based talent agency, Ari gave him a job at Miller Gold. Andrew soon began to shine. He signed some of the top talent in town and brought some much-needed money and clout to Ari’s company. However, like most men afflicted with the growing epidemic of I-like-skanks-itis, Andrew risked it all for a short-lived affair with a junior agent. Then, Ari had to step in and rescue him from the fallout of the affair. Just as things got back to normal, Ari was soon faced with another dilemma. This time, he would have to deal with Lloyd (Rex Lee).

Ari’s long-suffering assistant, Lloyd, finally grew a pair and asked for his big shot at the agency. Ari wasn’t about to give up his best subordinate, so he lured Lloyd into a 100-day deal that would give him his freedom to become an agent at Miller Gold. Lloyd was skeptical. After 50 days, he jumped ship and defected to the agency of Ari’s rival, Terrance McQuewick Malcolm McDowell). But Ari wasn’t about to roll over. He made a fortuitous deal with McQuewick to buy his agency, merge it with Miller Gold and destroy his enemies (namely, Lloyd) in the process. With a paintball gun in hand, Ari took to his new digs and blasted everyone he deemed unworthy. He also left a stern threat for his former assistant. Lloyd was a marked man. But Ari wouldn’t be Ari if he didn’t make somebody sweat. In the end, he made good on his offer to promote his favorite “gaysian.”

Now, as season seven opens, Vince has been cast on an action film and is forced to do his own stunts (Just don’t break that gorgeous face, baby!). Drama’s new career path has a last-minute snag that will require some help from his friends. Ari’s mega-agency is now the biggest and best in town. Sloan and Eric are going strong, but will their love break up Vince’s crew? Turtle is still pushing to get his own career off the ground. Will he finally come into his own, or will he forever be on the sweet teat of his boys?