Grown Ups: Go for the men. Stay for the ladies. 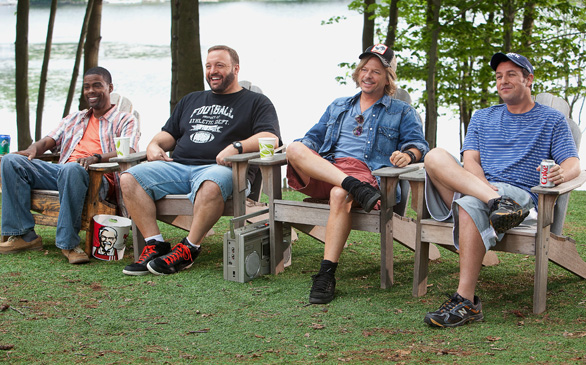 You gotta love an Adam Sandler film. For nearly 15 years, the “Saturday Night Live” alum has tickled the funny bones of teenagers, frat boys and lowbrow comedy lovers alike. At first glance, his comedy, Grown Ups, may look like another exploration in potty humor and boob jokes (It is.), but it also shows that the actor-producer-comedian is interested in making his projects more of a family affair.

Sandler plays Lenny Feder. He’s a guy who reunites with his childhood buddies after the death of their childhood basketball coach. Lenny was the ringleader – a good kid who was the glue that held the team together. Nowadays, he’s a famous Hollywood agent with an exotic fashion designer wife named Roxanne (Salma Hayek). He’s got two sons of his own who don’t know the first thing about how to be kids. They’re more interested in bossing around their nanny and communicating through a series of text messages.

Lenny’s buddies also have problems of their own: His friend Kurt (Chris Rock) is a hopeless and challenged househusband. His wife, Deanne (Maya Rudolph) brings home the bacon, but Kurt has a lot of trouble frying it up in a pan. Even worse, he has to deal with the taunts of his domineering and flatulent mother-in-law.

Marcus (David Spade) is the single guy of the group. He loves chasing tail and often keeps his married buddies on their toes.

Eric Lamonsoff (Kevin James) is a good suburban dad who wants to provide the very best for his wife, Sally (Maria Bello), and their kids. As the one-time tough guy and protector of the group, he still feels the pressure to compete – especially with Lenny. But deep down inside, Eric’s still a big softy.

After the coach’s funeral, the gang and their children gather at a log cabin where they used to spend their summers as kids. There, they inadvertently work out their issues while growing closer to each other and their families.

The male talent may sway audiences in Grown Ups. After all, it’s comprised of some of comedy’s best. However, it’s the women who steal the show. Rudolph, also a graduate of “SNL”’s stage, was proud to be part of the cast. She felt that the vibe on set was much like her own upbringing when she used to hang out with her family and friends.

“I had an older brother that was funny,” she recalls. “He was older enough that when his friends would come over, I was excited – ‘The cool kids are at our house!’ I was always trying to be funny with the cool kids. [Grown Ups] was just like that.”

For Bello, whose character is a celebrity-obsessed suburban mom, the real pleasure came from working alongside James.

“Kevin is the loveliest, yummiest, most beautiful man,” says Bello. “I just fell in love with him from the moment we met. He reminds me of my brother, Joey, from Philly. He’s the ultimate dad, a husband who’s really committed to his family, committed to his work, down to earth. He’s very funny, but he also has great depth to him. He has real moments that moved me so much. I even cried in one scene, he was so authentic.”

Hayek has the most love for Sandler, who was able to see past her more dramatic roles and cast her as his glamorous and sidetracked wife. She has since dazzled television audiences with her work on the NBC comedy, “30 Rock.” But it’s Grown Ups that really holds a special place in her heart.

“Adam never says, ‘Oh, this is the best joke. I’m going to say it.’ He gives the joke to the best character to say it. He also figures out who hasn’t had a funny thing in the previous scene. He looks after everyone.”