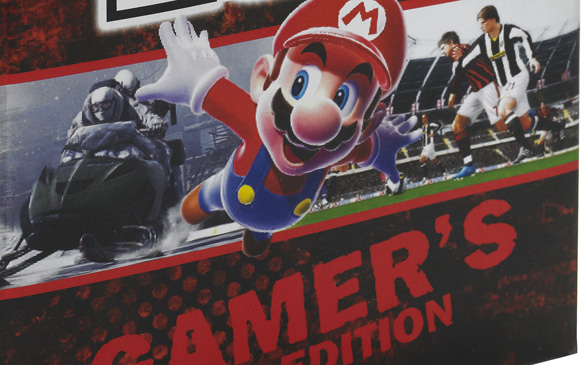 Assuming you keep a cleaner coffee table, any gamer friends whom you abandon on your couch will get a kick out of this collection of tidbits, facts and full-page images. While there is definitely a notable amount of praise heaped onto the big names, due honor is paid to the deserving smaller titles. Whether your guests want to read about who has the high score in “Guitar Hero III” or what the most popular cheat code is, there is trivia for gamers ranging from hardcore to casual.

Of course, the big picture on the cover can only belong to one plumber. While games like “Halo” and “Madden” may have notable presences in the index, Mario’s influence is felt all throughout the book. He has earned more than 10 world records, including most prolific character, longest-running computer game and most successful video game hero.

This should be a surprise to absolutely nobody. Not everyone plays games, but even people who have almost never touched a controller know the names of Nintendo’s iconic hero in red, his royal girlfriend, his brother and his dinosaur sidekick. Mario himself has appeared in action, RPG, sports, racing, fighting, party and puzzle games, and his sidekicks and enemies have spun off their own titles and even full series of their own. The man in red overalls has a unique knack for mixing his timeless, nostalgic charm with completely new experiences in each new title he lends his name to.

Oddly enough, “Super Mario Galaxy 2” is not so much of his usual reinvention as it is a return to the groundbreaking original. Fans of the original “Super Mario Galaxy” might feel that this is not a new title, but a natural extension of the first game. Like the original, space stuff has made Mario’s arch-nemesis Bowser insanely powerful, and Mario has to give chase to reclaim the stolen princess and restore order to the world. While the spaceship may be different (and shaped like Mario’s head), the quest for stars to advance ever closer to Koopa’s strongholds will fit like an old favorite pair of shoes.

Players who liked the new power-ups from the previous title will love the new items. Rock mushrooms let Mario surround himself with a stone sphere to bowl through enemies, while the cloud flower gives Mario the ability to generate clouds to walk on. Less usable items – like the Comet Medals – help to streamline more random elements of the first title.

The real star of the new item lineup is the return of Yoshi and a variety of food items that affect the tame dino, giving the long-tongued mount a freshness that we haven’t seen since “Super Mario World.” The right fruits can make the dinosaur with a saddle inflate with air or run with super speed. The ghost worlds are still impressive, but when Yoshi’s path-illuminating powers from eating a Bulb Berry is all that stands between you and a bottomless pit, the game’s already crazy physics become that much more intense.

While the challenges continue to be exciting, frustrating and often mind-bending, Mario has some new help in the form of a second player. Unlike traditional Mario multiplayer, which is either competitive, turn-based or multiple players doing the same tasks simultaneously, “Galaxy 2” introduces the idea of adding a star sidekick controlled by the second player whose job is to assist player one without taking over. The star can fetch items and hold, spin and even knock out some enemies, making incredibly difficult tasks, like gathering coins on a timer, far more manageable. Of course, as an assistant, the second player is only as good as player one’s Mario, and if the plumber can’t complete the stage, no amount of assistance will help the Starship Mario get to the princess.

“Super Mario Galaxy” was a hard act to follow – as evidenced by the full-page image and declaration on page 98 of the Guinness World Records 2010: Gamer’s Edition celebrating “Galaxy” as the “Most Critically Acclaimed 3-D Platformer.” “Super Mario Galaxy 2” does an amazing job of following up on this with a game that is fun, challenging and worthy of the Mario name.