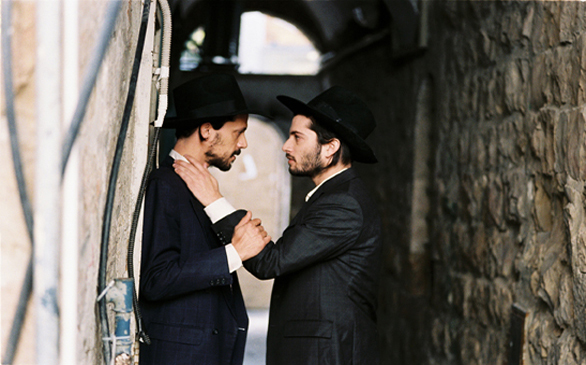 The challenge for Aaron (Zohar Strauss) is maintaining a homosexual relationship in his ultra-Orthodox Jewish community as well as keeping up the farce of being a married father of four. His catharsis comes to him in the meat locker of his butcher shop where Aaron first allows himself to act upon said lust that has been presented to him in the form of Ezri (Israeli heartthrob Ran Danker).

In this extremely religious neighborhood, definitions of propriety are plastered on the walls for everyone to read so that the young and the old cannot mistake which acts will grant them salvation and which will cast them to a sinner’s end.

Ezri is swept into town by a hailstorm and, by chance, uses Aaron’s butcher shop to make his phone call home. Without a job and with no place to stay, the butcher offers the student a job and bed for a few nights.

Daily life may resume, but it is anything but ordinary for the two co-workers. Tensions mount, sexual tensions, that is. They have several close encounters, but Aaron is the one to squash the moment with a sledgehammer by bringing in God and the beliefs of the Jewish faith. The two men are lectured unknowingly by local practitioners about the importance of resisting temptation. Aaron’s faithful wife refuses to acknowledge the fledgling relationship between her husband and the young man, even when the town’s whisperings turn into open accusations.

Eyes Wide Open does not condemn or glorify orthodox Jewish life or homosexuality. Instead, the conflict between religion and sexual orientation is an unnecessary one for Aaron, whose actions are too liberal for his neighbors who post signs and spread the condemning gossip through the streets. Aaron begins coming home later and later, opting to spend hours with his much younger lover.

The film does not present one as an opposition to the other; however, there is a sense of regression. Aaron and Ezri are not burned at the stake or brutally beaten to death. With the exception of a short sequence in an alley, the unwanted couple is more threatened by its friends’ hushed voices than by pitchforks and torches.

The challenge turns out to be too much for their relationship, but what the film succeeds in questioning is whether such a struggle actually allows for the catharsis of the soul. Food for thought, maybe.