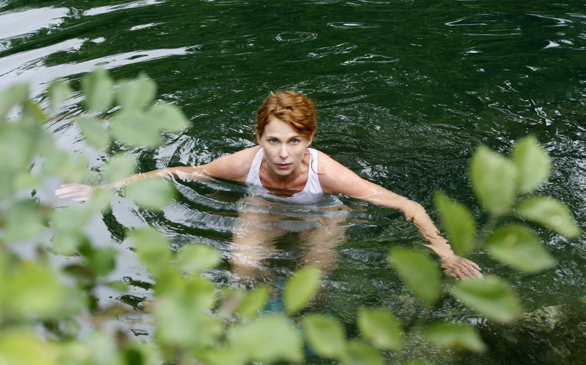 Let It Rain is a film about the collision of eight lives and a failed documentary that unites them all. The film opens with Agathe Villanova (Agnès Jaoui), an accomplished feminist writer, speaking with her boyfriend Antoine (Frédéric Pierrot) about an impending vacation to the French countryside to visit her sister and tie up the loose ends of her mother’s death a year before.

Antoine is a man over 45 who wants to settle down with Agathe, even though she is adamant about politics and a woman’s place in the business world. As a result, her business life supersedes her and Antoine’s personal relationship, causing a strain that they hope can be solved by this “mini-vacation.”

Florence (Pascale Arbillot), Agathe’s sister, wants a change of pace from the normal stresses of life with her husband Stéphane’s (Guillaume de Tonquedec) childish outlook on life, need to be supported on every venture and demanding personality. Florence and Stéphane’s relationship shows small cracks, but inevitably they both come to rely on each other heavily.

Michel Ronsard (Jean-Pierre Bacri) is a divorced filmmaker who is far from his glory days and clamoring to start anew with his journalist career. Once thought of as a brilliant cinematographer and praised for his work, Michel is now perceived as a hilarious, creative yet clumsy dreamer who is easily distracted. In the evenings, he frequents the hotel/bar of his former intern, Karim (Jamel Debbouze) to discuss his current project, a film about prominent women in society for which Agathe is the subject.

Karim is a loyal student of Michel, believing under his tutelage he can reach his full potential. Filming of the documentary starts off with good intentions, but things fall apart quickly with missed appointments and camera batteries, directorial style conflicts between Michel and Karim and Michel’s knack for wandering.

We soon find things aren’t the way they appear on the surface. Karim is conflicted while taping at the Villanova’s family home because his mother Mimouna (Mimouna Hadji) has worked there as a maid for three generations. It often angers Karim seeing his mother working as though she is an indentured servant beaconing to Stéphane’s every whim.

In Let It Rain there is general overall feeling among the characters that even though there is disarray or dissatisfaction with life at the moment, there are people who try their hardest to help. There are many subplots and a few twists that encompass two or more characters, but at the end of the film, the audience can come away with a feeling that through hardship the people within the film have come to know themselves and others better.