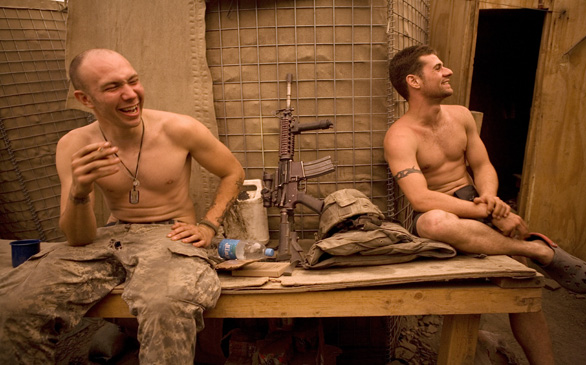 Two intrepid journalists spent over a year with the Battle Company of 173rd Airborne Brigade in a remote Afghani valley considered to be one of the most dangerous postings of the war. This documentary gives us combat (bullet by bullet), soldiers (strike by strike) and Afghanis (elder by elder), all set against the harsh terrain of a valley that has claimed 50 U.S. lives. It’s Afghanistan at its ugliest and documentary filmmaker at its most exciting, and it’s a compelling combination.

The soldiers of the Second Platoon are flown to the outskirts of the Korengal Valley, from where they trudge deep into Taliban country to set up a U.S. outpost that they will finally call home. Well, they’ll probably call it base, but when you’re there 24/7, there must be a bit of a crossover.

Another crossover is their actual work. When three elders show up wanting to know why someone shot their cow (yes, it’s a funny story), the soldiers become negotiators. When they’re faced with desolate ground, they become construction workers. They dig out trenches and build firewalls but put down tools to return fire when they come under attack, which happens on an hourly basis. As soon as the dust settles, they pick up their shovels and get back on the job. But this isn’t the dangerous part. That comes later.

We see the soldiers strategizing, grieving, dancing and sunbathing (yes, one was actually doing that!) and hold our breath when another steps away from safety to get a better shot at taking Mr Jihad’s head off. We applaud them when they move like magnets to protect their injured, cry with them when a comrade falls and feel proud when they name their U.S. outpost after their lost buddy PFC Juan Restrepo, who could create magic with his guitar.

Everyone has an opinion on the war and I’m going to spare you mine, particularly as the filmmakers managed to, but watching the chronically hampered progress of the soldiers and seeing their tiny number pitted against such sprawling, forested lands, it just doesn’t seem to make sense. Neither does the fact that the United States withdrew from the Korengal Vally in 2009.

Apparently, the initial reason for entering this region was because, “It is considered to be a crucial relay point for Taliban fighters.” The reason to withdraw was, “This repositioning responds to the requirements of the new population-centric counterinsurgency strategy.” This sounds like gobbledygook to me, but as they are the esteemed leaders chosen to command this war, I assume they know what they’re doing.