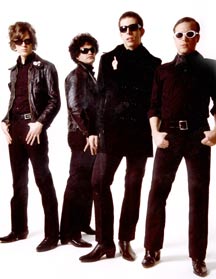 You can’t see it through the sunglasses, but you imagine that there’s a twinkle in Sammy James, Junior’s eye when he talks about the Mooney Suzuki’s Electric Sweat, recently re-released on Columbia Records. After all, the album’s snarl and shimmy perfectly evokes the Nuggets-era rock and roll he loves so much, and with major label muscle now backing up the band’s polished, see-it-to-believe-it live shows, the disc is bound to take off in all the ways it deserves to. But James and the boys have pushing the record on the road for nearly two years now, and for some reason, I’m bent on searching for some hint that he’s grown weary of playing the same songs night after night.

"It’s a great fucking record," James says flatly, with far less irony than he injects into his stage persona, "and more people should be aware of it, so we’re, uh, happy to support it." But even a great tune like "In A Young Man’s Mind," which sounds like the MC5’s "Rama Lama Fa Fa Fa Fa" spliced genetically into the Who’s Live At Leeds-era "Young Man Blues," has to get a little stale after a couple hundred run-throughs, right? "Well," James muses with a smile, "when you’re working on a song, from the very beginning, you’re thinking ‘If this song is gonna be successful, then I’m going to be playing it every day, through, like, my fifties.’ So if you’re not prepared to play it endlessly for the rest of your life, you shouldn’t put it on your fucking record, you know?"

He’s kidding, but only a little, and the same brand of true-believer fervor, presented with a sly grin, is guaranteed to color James’s stage banter when the band hits the Troubadour on April 5. He’s been known to deliver onstage orations in abject praise of the electric guitar, and to repeat the diatribe the next day, word for word, without losing a shred of his preacher-like conviction. "Everything we do is very deliberate," he notes, as if reluctant to admit it. "Even our spontaneity is planned and deliberate." James has been known to invoke his band’s art-school background in discussing his act, and he concedes that the Mooney Suzuki is, in some ways, "a performance art piece recreating a rock and roll band, rather than an actual rock and roll band." But he insists that "as much as it is, an almost scientific dissection and recreation, our subject material is still something that we so genuinely love, and we’re such huge fans of the music of ’60s and ’70s subculture and pop culture, that I think you can be sincerely ironic. It’s fun to do what we do."

Coming off tours with the Hives and the Strokes, the Mooney Suzuki’s traveling celebration of rock and roll has been educating new fans of the new rock for a long time now, and don’t expect James to let up. "Well, I don’t know if I’d use the word ‘educating,’ but we’re helping to enlighten. You know, a kid might have heard a Who record, and not have seen how exciting it could be," he notes. "Or a kid might have seen another band doing something similar to this, and have been turned off by it, because most people who do what we do get it so wrong. It’s kind of like there might be flour, milk, water, eggs, and sugar in a bowl, but that doesn’t necessarily make it a birthday cake, you know? And we’re definitely a fucking birthday cake."