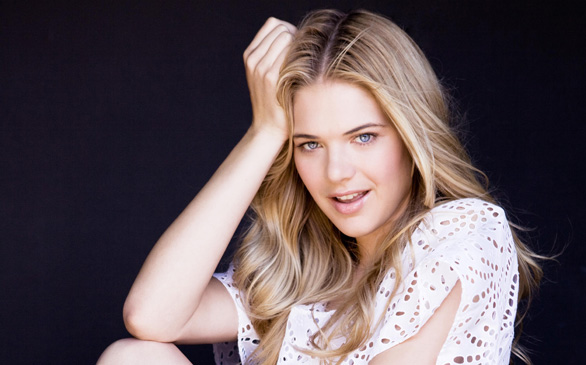 Blonde bombshell Kate Lang Johnson is working hard to make her face and name known. She has starred in the films Fired Up! and Behind the Mask: The Rise of Leslie Vernon and appeared on many TV shows, including “Ugly Betty” and “ER.”

Now, she’s a part of the newest summer series on NBC, “Persons Unknown.” It begins with a group of strangers stranded in an unknown place. They only have each other to seek answers to their puzzling situation.

The show is currently contracted to be a mini-series but, depending on its success, could possibly continue for a second season.

“I would of course love to do another season of ‘Persons Unknown’ if that was ever in the cards,” says Johnson.

In the show, Johnson’s character, Tori, awakes to a strange setting and unfamiliar faces, but that’s a scenario Tori knows all too well. She’s continuously waking up extremely hung over in random hotels.

Tori’s promiscuity and party-girl attitude make the character all the more fun to play for Johnson.

She admits, “It’s fun to play the bratty kind of girl you love to hate. She’s a really fun character. As the show progresses, you start to like her more. You see she’s got a vulnerable side. She’s a little bit damaged.”

The cast and crew previously filmed all 13 episodes in Mexico City. Johnson felt a surreal connection to the series as it was shot in an isolated mock town that was built in the surrounding mountains.

“We were out of our comfort zones, away from friends and family, which is just like the characters. I think that added something to the show, and it gave a very unique aspect to it,” tells Johnson.

Filming in Mexico City was as much a treat as it was work for Johnson.

“I just had the best time living there,” she gushes.  “The people were great, and I got to go to a lucha libre, which was fun seeing all the wrestlers. I would love to go back.”

Unless “Persons Unknown” continues for a second season, it might be difficult for Johnson to find the time to return to Mexico City. She has quite a travel agenda.

“I’m a little addicted to exploring the world,” says Johnson.

So far she’s journeyed to India, China and Brazil, to name a few on her lengthy list. Her next stop will likely be down under to Australia and New Zealand. Johnson intends to visit her “Persons Unknown” co-star Daisy Betts, who recently had a baby.

Although her getaways are always a blast, Cali’s not exactly the worst place to come home to. Johnson currently spends a lot of her time auditioning and is keeping her fingers crossed for a couple of new films.

“The more I can work, the more fun I’m having,” says Johnson. “I feel like I have the best job in the world.”

Modeling might be what jumpstarted Johnson’s career and paid for her college education, but she says it was never her ultimate goal.

“I just sort of fell into it. I’m grateful for all that modeling has done for me, but it’s not something I’m actively pursuing right now,” Johnson explains.

With modeling now a favorable pastime, she shares ideas for her acting future.

“I would love to do more films. That’s really a unique environment,” says Johnson. “And I would like to play some darker roles. That’s very fun.”

The type of character she plays is tremendously significant to Johnson. She finds much satisfaction in the process of inhabiting a character, as she did Tori.

“I would journal as the character and do all sorts of stuff like that. It was really a unique experience,” says Johnson.

With a keen eye for extraordinary characters comes perceptive judgment with a script as well.