Driving Under the Influence of Sleep Deprivation 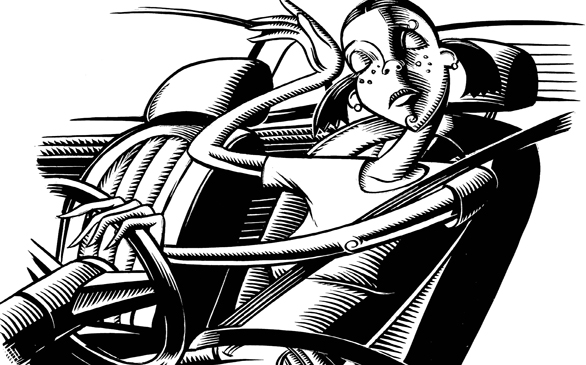 In the 1980s, there were a number of initiatives to keep people from driving while under the influence. Mothers Against Drunk Driving formed, accompanied by its own chart-topping theme song. Former First Lady Nancy Reagan even founded her own group, D.A.R.E., which discouraged young people from consuming narcotics. But in the decades since these groups’ inception, the roadways of America have encountered a growing new predator: the sleepy driver.

According to the National Highway Traffic Safety Administration, nearly 100,000 drowsy driving crashes are reported to police each year. Of these accidents, more than 1,500 Americans are killed and 71,000 wind up injured. These figures are staggering considering the number of annual drunk driving fatalities is 11,773.

While sleep-deprived driving is not indigenous to any particular race or economic background, it does manifest itself based on lifestyle. Sixty percent of all students utilize stimulants in order to alter their normal biological sleep pattern.

Hiep Lee knows firsthand how scary driving can be when sleep deprived. The 25-year-old executive chef spent most of last year traveling between her job in Las Vegas and her family’s home in Sylmar. It was shortly after 5 a.m. when she awakened on the side of the road, with two men tapping on her car window, frantically trying to rouse her.

“I’d fallen asleep,” she says. “I couldn’t believe it. That’s not me. That’s just not something I ever thought I’d do.”

Her hectic work schedule coupled with meeting the demands of her personal life had finally caught up with her. But it was her realization that she was only averaging three to five hours rest per evening, balanced with energy drinks and coffee that caused her to completely overhaul her lifestyle.

Now, she teaches at a small cooking school a little closer to home. She also makes sure to schedule frequent naps, especially during days when her obligations and workload are a little heavier than normal.

“I’m surprised I wasn’t hurt or that I didn’t kill anybody,” she says. “Sometimes I think about all the things that could’ve gone wrong. You never completely walk away from stuff like that. There’s always what might’ve been the worst case scenario.”

Research has demonstrated that 17 hours of sustained lack of sleep impairs performance in the same way as a blood-alcohol concentration (BAC) of 0.05 percent. Staying awake for 24 hours increases that level to 0.10 percent (equal to the legal limit of intoxication). This means that Lee would have been just as in danger if she’d downed several alcoholic beverages and took to the open road.

For some, falling asleep behind the wheel can be fatal. Luke Cordova wears a leather wrist cuff that used to belong to his younger brother, Roman. Roman was killed when he drove his car into oncoming traffic after falling asleep at the wheel. He died instantly. The younger Cordova was an aspiring fashion designer who was holding down two jobs to finance what would have been his T-shirt line. Luke wears his cuff in remembrance.

“I walked through the door, and my ma was sitting with the priest. They told me my brother died. I was like, ‘Dude, I can’t even handle this right now,’ and I went into my room to be by myself. He used to ask me for rides, and I would get pissed off about it. Now, I feel like shit everyday because we won’t ever see him again.”

Students and professionals are strongly advised to focus less on energy boosts to get them through the day and learning to retrain their bodies into a more natural sleep pattern. Some experts encourage afflicted individuals to keep a journal, which may offer greater insights into stress patterns and sleep hindrances. There are also a number of natural supplements that have been known to encourage restfulness without the artificial stimulation of caffeine. Valerian root, a known anti-anxiety treatment may promote a good night’s sleep, as does melatonin. Even spending a half hour at rest with eyes closed can generate restorative benefits.

Ultimately, it is up to each person to know his or her own limits and to live and act within the parameters of good judgment. After all, when behind the wheel of a vehicle, it’s not just the driver’s life at stake.