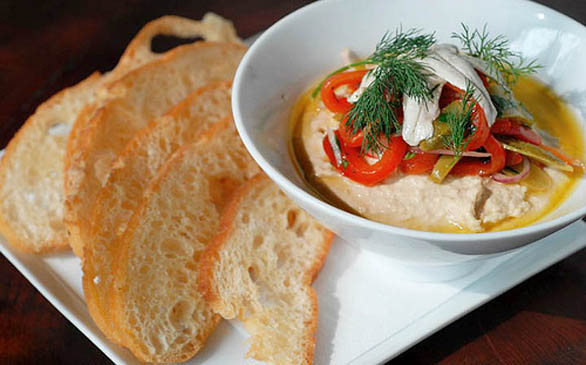 The ArcLight Cinemas complex has seen its share of inhabitants. The culinary school became Le Cordon Bleu, the sushi restaurant has come and gone, as has Charcoal. I don’t know what gives with the revolving leases, but go enjoy BoHo while it lasts.

Nestled in the corner spot directly across from Amoeba Music, BoHo is the brainchild of restaurateur Adolfo Suaya from Gaucho Grill, Dolce and my beloved the Lodge Steakhouse. The name is derived from the word bohemian and Hollywood, though the name boho has been around for years (in the fashion world anyway). BoHo mixes international cuisine and a rotating beer list that is just as diverse as the city it resides in.

The pizza list is nothing to shy away from; you name it, BoHo probably has it. It’s also nice that the vegetarian pizzas are not the boring cheese variety, but boast toppings I’ve never had, like the fingerling potato with roast garlic, the Bianca-Verde with preserved lemon and the vegetable-laden Primavera. Though the Primavera is loaded with toppings, it’s not soggy and it’s big enough to split between two people, especially when you are considering adding a beer to your meal.

I know it’s wrong, but if a restaurant has a burger on its menu, I expect it to be able to hold its own against all the others. Some restaurants have failed miserably, but BoHo passes with flying colors. The caramelized onions ooze out the sides, as does the cambazola, a blend of Gorgonzola and triple creamed cheese. It’s so decadent, this burger, and the Thousand Isle dressing is just the icing on the cake. But no burger stands alone, and the Belgian fries with fresh aioli and house ketchup are the perfect accoutrement.

Even the not-so-traditional Turkey Meatloaf, with its cranberry sauce and gravy, is firm and moist, and when paired with green beans or asparagus, you’ve got yet another feast.

Should you happen to be at BoHo during the day, lunch specials don’t skimp on the portions, like the India-influenced Coriander Masala Salmon with aromatic rice and the hearty Beef Short Rib Panini with horseradish mayo. Or, try the Sunday Brunch, where you pick a yoghurt, fruit plate, soup or salad to accompany your Eggs Florentine, Huevos Rancheros, Vegan Tofu Scramble or their popular Corned Beef Hash. For an additional charge, you can add bottomless Mimosas, Screwdrivers or Bloody Marys.

No matter what time of day, BoHo is pleasantly delicious – so be sure to stop by next time you’re in the area. Hopefully, it stays around for a long time to come.