Martin Lawrence: On the Rebound 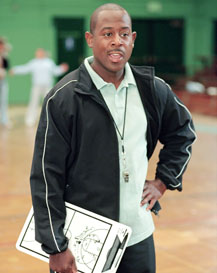 Since 1992 when he entered our homes with the hilarious TV show "Martin," Martin Lawrence has been making America laugh thanks to his truly one-of-a-kind characters. From his cross-dressing performance as Sheneneh on "Martin" to his padded-down performance as Malcolm Turner in Big Momma’s House, Lawrence quickly became one of Hollywood’s A-list comedians, earning $20 million a picture and raking in the Benjamins with his starring projects.

Now the TV-turned-big-screen funnyman is reinventing himself, pulling an Eddie Murphy by marketing himself as a family friendly comedian.

In Twentieth Century Fox’s Rebound, Lawrence stars as Roy, a college basketball coach whose focus is more on his latest endorsement deal than his next game. When his explosive temper gets him banned from courtside, Roy finds himself waiting for another coaching offer. What he gets, though, is as far from pro ball as he could have ever imagined.

Hastily scribbled on a fax form, Roy accepts an offer to coach the members of Mount Vernon Junior High School’s "Smelters" basketball squad – a team with no chance whatsoever of ever playing college ball. The boys – and one girl – possess little athletic skill and almost no grasp of the game itself, and soon Roy finds himself coaching a team that’s able to score unthinkable numbers, like losing 0-109.

Of course – since this is a family movie – Roy’s good side gets the best of him, and soon he takes these fumbling youngsters under his professional wing, teaching the kids to pass, rebound, dribble and score with the best of them. While at first Roy’s change of heart arises out of his hope that his good deed won’t go unnoticed and he’ll be back in his old job in no time, Roy eventually discovers something he thought he lost long ago … his love for the game.

Coming off a string of action-packed films and R-rated comedies, the PG-rated Rebound may seem like a stretch for Lawrence, but he embraced the idea of playing a character whose edge is mocked, then softened by a ragtag team of wannabe ballplayers. Lawrence says he was inspired by Murphy’s recent success in kid-friendly blockbusters like Shrek and Dr. Dolittle.

"Eddie Murphy said I should try something new like this – working with kids in a comedy – and I’m really glad he did," Lawrence says. "Working with kids was a lot of fun."

Of course, trying to breathe new life into his acting career wasn’t the only reason Lawrence accepted the role of Coach Roy. A lifelong basketball fan, Lawrence says he just couldn’t resist starring in a film with a basketball focus.

"Working on a film about the game I love isn’t like work," Lawrence says. "With Rebound, I got to practice on-camera as well as off-camera. What could be better?"

But that doesn’t mean Lawrence was just working on his jump shot while shooting the movie. Although the star did relax between takes by playing pick-up games on a court beside his trailer, Lawrence played multiple roles – both on screen and off – during the course of the film. In addition to starring in Rebound as its lead, Lawrence wore the hat of executive producer and played another supporting role on screen, that of the flamboyant clergyman Preacher Don.

"I thought it would be fun to have an outrageous character like that to inspire the kids," Lawrence says of Preacher Don, a character who gives motivational pre-game speeches to the young players.

And if there’s anything Lawrence knows, it’s how to create memorable and hilarious supporting characters. Although "Martin" went off the air in 1997, those who caught Lawrence’s 2002 standup film RunTelDat know that some of Lawrence’s most memorable characters are still very much a part of the actor, including the unforgettable Sheneneh.

"My comedy has evolved since the show because of the challenges in my life, but I’m very thankful for those characters," Lawrence told UGO reporter Dan Epstein while promoting RunTelDat. "They will always be a part of me."

And so will standup. Even though Lawrence may be reinventing himself with Rebound, he’s not trying to run away from his past or pretend it never happened. In fact, Lawrence would be one of the first comics to admit that he finds his onstage routines to be therapeutic.

"You have to laugh to a certain degree," Lawrence says. "The laughter is part of the masquerade of the pain. It (putting his own life into his standup routine) is difficult in the sense that I have to go back and relive it. It’s one thing to go through everything I’ve been through and then get past it and move on. But to do standup and get out the paper clippings and news reports on myself, it’s a hard thing to go through.

"It’s very therapeutic for me, though, because it reminded me and gave me some understanding," he adds. "It humbled me to a degree to say, ‘Wow, that was me.’ And if it can help me to understand a road that I don’t want to travel again, then it’s necessary. I have to find a way through. I can’t ask other people to laugh if I’m not laughing myself."

Recently, Lawrence has been spending his time focusing on the important things in life – things like family, friends and his spiritual side.

"I’m working hard not to take things for granted," he told Epstein. "That helps me to understand that life is what it is. You work hard to have good days and a good life."

Lawrence has even come out to say that he doesn’t hate the press for publicizing his trying times – or at least not all press. "I like good press. I like the talented, honest people that report accurately, and I have a great respect for them. We need them because they are the ones that help shape the pulse of a lot of us in a good way. But the ones that sensationalize, talk bullshit and talk negatively, I have no respect for, and I think they are the scum of the earth. A lot of them, with their hateful words to knock somebody down, are the same people who didn’t want me to be here."

With Rebound, Martin Lawrence is letting them know that he’s not planning on going anywhere. In fact, if Lawrence finds similar success in the family genre the way that Murphy did, his fan base is about to be bigger than ever.