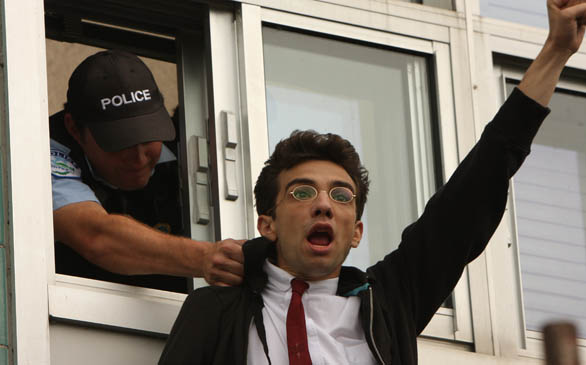 You live in this city long enough, and you’re sure to see at least one film at the Laemmle Sunset 5. It shows the small, independent and foreign films that no other place would risk screening for fear of not making a profit. Heaven forbid. I’ve seen my fair share of films struggling to gain distribution, and for the most part, the selection is superb.

The Laemmle on Sunset is also known for hosting film festivals and special events. In fact, it is so well revered that one of the most prestigious film festivals in the world is sending a selection of 10 from its lineup for the pleasure of the Angelenos who are an entire country away from the actual event.

The Tribeca Film Festival was established in 2002 by Jane Rosenthal, Robert De Niro and Craig Hatkoff and is still a rookie to the festival circuit. As a response to the 9/11 attacks and the subsequent demise of the Tribeca neighborhood in New York City, the festival’s mission is to redefine the film festival experience for the general public as well as to help restore lower Manhattan.

The Tribeca Film Festival 2010 was held in April, but that doesn’t mean we can’t enjoy them. Like a Christmas present in June, Tribeca Film screens 10 of its inaugural titles during a two-week run from June 25 to July 8 at everyone’s favorite independent theater in Los Angeles: the Laemmle Sunset 5. Because the venue only has five screens, five films screen June 25-July 1, and the remaining five will be shown July 2-8. This is an incredible honor because this is the first time Tribeca Film titles are in theaters outside of Tribeca’s New York base.

To get straight to the point, the films are an impressive collection of award-winning dramas, comedies and documentaries starring the talent of Andy Serkis, Jay Baruchel, Juliette Lewis, Alexander Skarsgård and Tilda Swinton. Of the 10, these are the ones I would keep in mind if you’re interested in good moviegoing art appreciation.

The Immaculate Conception of Little Dizzle is a spiritually eclectic, dizzyingly comedic narrative about a cubicle worker who sees his life going nowhere and is forced to take a job as a night janitor at a sketchy research firm. When he and his coworkers test products that do crazy things to their bodies, the dark comedy really lets its artsy hair down.

Metropia is a Swedish, animated, futuristic film noir. It’s the year 2024, and all of Europe is connected by a web of underground railways that are inhabited by a heavy population of underrepresented workers. Graced by the voices of Juliette Lewis, Vincent Gallo, Stellan Skarsgård and Alexander Skarsgård, this arresting film is a conspiracy theory everyone will enjoy.

sex & drugs & rock & roll is a British film that was nominated for numerous awards. Andy Serkis is Ian Dury, a punk rocker who suffered from polio as a child and whose success brought him fame and lost him a lot more. Director Mat Whitecross treats the subject with honest sincerity as well as cruel honesty at the roller coaster life of a star.

The Trotsky is a film from Canada that features the comedic talents of Jay Baruchel as an eccentric high school student, Leon Bronstein, who firmly believes that he is the reincarnation of Leon Trotsky, the Bolshevik revolutionary and Marxist theorist. His bucket list is identical to that of his idol, and Leon is insistent on meticulously living by it. Writer-director Jacob Tierney makes a bold, but not outlandish, statement about how the youth culture might misunderstand what a revolution really entails.

Think of it this way, you don’t have to spend any money on a plane ticket, a hotel room, a subway pass or on a festival badge. A little bit of Tribeca, N.Y., has been transported to the Golden State for your comfort and convenience. Isn’t that nice of them?